Recent Law Grads Have Had $30,000 Of Their Student Loan Debt Cancelled

Committee For a Responsible Federal Budget, How Much Student Debt Has Already Been Cancelled?:

Though some policymakers continue to propose cancelling some, most, or all student debt, a great deal of student debt has already effectively been cancelled. Overall, we estimate the equivalent of $5,500 per borrower will have been cancelled by the scheduled end of the student loan payment pause on May 1, at a cost of more than $100 billion. Extending the repayment pause further will cost an additional $50 billion per year, and policymakers should reject calls to do so.

Aside from some targeted cancellation by the current and previous administrations, nearly every borrower has benefited from interest cancellation during the current repayment moratorium while higher-than-expected inflation has eroded current balances. However, that benefit has been highly uneven and significantly more regressive than the already-regressive $10,000 across-the-board debt cancellation proposed by then-Presidential candidate Joe Biden during the 2020 campaign. 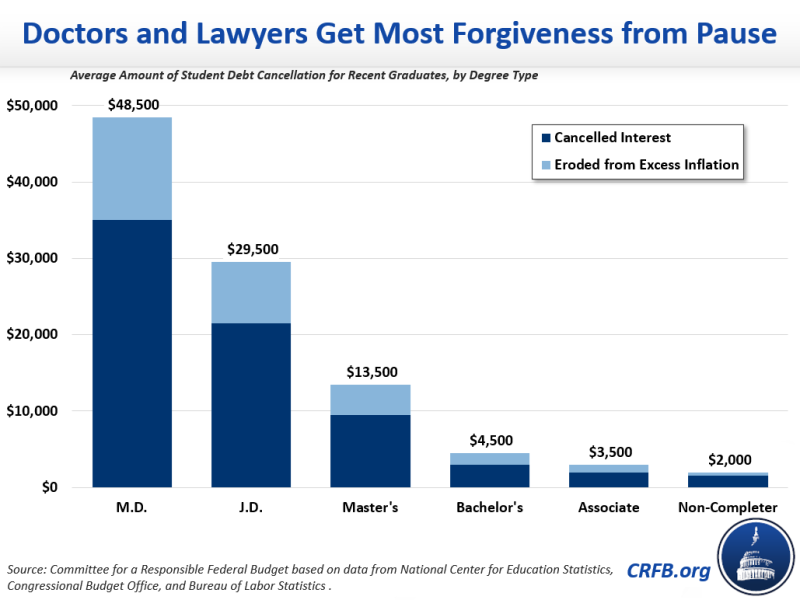 We have repeatedly noted that across-the-board debt cancellation – even if limited to $10,000 per person – is expensive and regressive on top of being poor economic and higher education policy.