Lesson From The Tax Court: What’s Excluded From The §132 Exclusion? 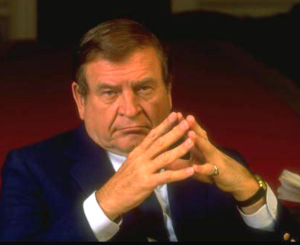 Tax Day is here! And what better way to observe the day than a lesson on §132, a lesson that evokes the ghost of Dan Rostenkowski, whose curmudgeonly visage appears to the right.  For those who don’t know, Rostenkowski was the chairman of the House Ways and Means Committee from 1981 until 1994 when, in the great tradition of Illinois politicians, he was indicted on various counts of fraud, eventually pleading guilty to mail fraud.  Yes, political corruption in Illinois actually has its own Wikipedia entry.

During his time as head of the House tax writing committee, Rostenkowski oversaw multiple major legislative changes. Perhaps his crowning glory was his role in the 1986 Tax Reform Act, which has long been viewed as a triumph (however short-lived) of sound tax reform.

Today’s lesson has its genesis in the earlier Deficit Reduction Act of 1984, PL 98-369, 98 Stat. 494.  There, Congress wrote a new §132 to exclude from gross income a long list of traditional employee fringe benefits.  In Douglas Mihalik and Wendy J. Mihalik v. Commissioner, T.C. Memo. 2022-36 (Apr. 13, 2022) (Judge Gustafson), Mr. Mihalik received free airline tickets for himself and members of his family. He sought the exclusionary shelter of §132.  While §132 is very broadly written to cover various family members of an employee, Judge Gustafson teaches us how some family members are excluded from the exclusion.  Details below the fold.

Law: Tax Treatment of Airline Passes
One of the perks of working for an airline has long been free or reduced-cost airline tickets.  Professor Joel Newman gives a great history of that benefit in his article Fly Me Fly My Mother, 35 Tax Notes 291 (1987).  The tax treatment of the free airline ticket is the issue in today’s case.  Let’s run through it.

It always starts with gross income.  Section 61 tells us that gross income is “all income from whatever source derived.” That mysterious term has long been interpreted broadly to include any “accessions to wealth, clearly realized, and over which the taxpayers have complete dominion.” Commissioner v. Glenshaw Glass, 348 U.S. 426, 431 (1955).  Similarly, Treas. Reg. 1.61-2(d) says that gross income includes receipt of property or services as compensation for services, not just cash.

Thus, if I work for an airline and, because of my status as an employee (providing services), the airline gives me a free ticket to fly to Hawaii, that ticket is gross income to me in the amount of its fair market value.  The ticket is an accession to wealth just as if my employer gave me the cash and I then used the cash to buy the ticket.

But the analysis does not end there.  Section 132 allows taxpayers to exclude from their gross income certain fringe benefits of their jobs.  In my example, §132(b) allows me to exclude that accession to wealth if the airline “incurs no substantial additional cost (including forgone revenue)” in providing the ticket to me.  Logically enough, those are called no-additional cost benefits, and typically apply to businesses that may have excess capacity, such as hotels, schools, theaters, amusement parks, and airlines.

Thus, I could exclude my ticket to Hawaii from gross income if there were unsold seats on the plane and I was simply using that excess capacity.  But if my ticket either actually bumped a paying customer or locked up a seat on the plane, making it unavailable to a paying customer, the exclusion would not apply.  See Treas. Reg. 1.132-2(c).

That’s a pretty generous exclusion.  But wait.  It gets better.  Congress did not limit this exclusion of no-additional-cost benefits to actual current employees.  As originally enacted, what are now §§132(h)(1) and (2) extended the exclusion benefit to retired employees, disabled employees, spouses and surviving spouses of employees, and the dependents of employees.  Wow.

Still, as generous as it is, the exclusion allowed by §132 is not limitless.  That’s what we learn from today’s case.

Facts
The tax year at issue is 2016.  As a retired airline pilot for United Airlines, Mr. Mihalik was entitled to use the airline’s Retiree Pass Travel Program (“Program”). The Program allows “a retiree’s eligible pass riders with space-available pass travel privileges for leisure travel on flights operated by United and United Express retired employees free standby airline tickets.”  Eligible pass riders include the retiree, their spouse, their domestic partner, their children up to age 26, adult disabled children of any age, and up to two additional people, denominated as “enrolled friends.”  Some of those free tickets are excluded from income, but others are not.  The Program gives this guidance on how United Airlines complies with tax law:

“Tax laws and regulations govern whether or not an eligible pass rider’s travel is taxable or not. Under existing tax regulations, pass travel by domestic partners, enrolled friends and non-dependent children ages 18 until they attain age 26, regardless of pass type, is taxable and has to be reported to the IRS. If the travel value exceeds $600 for the year, a Form 1099 will be mailed to you accordingly.”

In 2016 Mr. Mihalik made extensive use of the Program, obtaining free tickets for himself, his wife, their daughter, and two other family members that he designated as “enrolled friends.”  Judge Gustafson is careful to give us their full names: Sean Garth Mihalik and Jessica Marie Liening Mihalik.  From that one might assume that Sean was their son and Jessica was their daughter-in-law.  For some reason, the Mihaliks never told the Court what the relationship was.

The Mihaliks did not report the $5,478 as income, nor did they report either Sean or Jessica as dependents.  The IRS picked up on this omission, selected the return for audit, and sent the Mihaliks an NOD proposing a $2,862 deficiency (apparently there were some other smaller issues).  The Mihaliks petitioned the Tax Court and the IRS moved for Summary Judgment.

Lesson: The §132 Exclusion Does Not Include ALL Your Family
Mr. Mihalik is the airline employee whose services created the entitlement to free tickets under the Program.  Therefore, the scope of the §132 exclusion keys off of his relationship to the people who receive free tickets.  While those tickets were an undeniable accession to wealth to Sean and Jessica, the tickets nonetheless represent compensation to Mr. Mihalik for his prior services.  The tickets were thus issued to him and he gave them to Sean and Jessica, who thereby are able to exclude their value under section.  Mr. Mihalik, however, must look elsewhere to find some reason why those tickets are not gross income to him.  His best shot was §132.

While §132 is very generous, it is not as generous as Mr. Mihalik needed.  It allows a taxpayer to exclude free airline tickets given to some family, not all family.  That family must be either the taxpayer’s spouse or dependent child.  Sure, the particular airline’s benefits might be more generous.  The United Airline Program, for example, provided free tickets to non-dependent children (up to age 26), to domestic partners who were not spouses, and to two additional designated “enrolled friends.”

Judge Gustafson agreed.  He explains how the Mihaliks, who were proceeding pro se, pretty much failed to follow Tax Court rules and so did not give the Court the information it needed to rule in their favor:

Based on that information, there was simply no way that either Sean or Jessica came within the scope of the §132 exclusion.

It may be that Mr. Mihalik had received free tickets for Sean and Jessica in the past and that the failure to report that income in 2016 was just a continuation of a prior pattern. And it is certainly true, that amounts reported on a 1099 are necessarily gross income.  After reading this opinion, however, we should all learn the lesson that free tickets to an airline employee for use by someone other than their spouse, dependent child, or parent (if you are an airline employee), are gross income and are not excluded by §132.

Comment 1: What About the Daughter?  Judge Gustafson notes that the Mihaliks “did not claim dependents on their return” for 2016.  That means they did not claim their daughter as a dependent.  But §132(h) extends the exclusion only to dependent children.  And it is certainly true, that a taxpayer can have gross income even if that income is not reported to the IRS by some third party.  So perhaps the Mihaliks can be grateful that the IRS did not pick up on what appears to me to be another item of underreported income.

Comment 2:  It's Not A Freebie But It's Still A Great Discount.  The Mihaliks still received a significant benefit from the Program, even if those benefits were taxable.  They did not have to pay the full value of the tickets they received for Sean and Jessica. Instead they only had to pay the tax, which is like paying a big discount. I admit that is a difficult concept for some people to wrap their minds around. For example, Texas Tech offers some students a housing stipend in addition to a full ride on tuition. One year, one such student stormed into my office demanding to know why her housing stipend was taxable income. She complained that she had been promised free housing but now she would have to pay tax on the value of the housing. Her stipend was about $600 and her marginal rate was about 10%.  I suggested to her that she think of the housing stipend as a discount.  That is, she would be quite happy if she had to pay only $60 in rent for a $600 apartment.  She would think that was quite a bargain. She stormed out, unconvinced.

Comment 3:  Rostenkowski's Ghost.  To bring it back to the intro, the original §132 did not have a special provision for airline employees.  All employees of all industries were treated the same and got the same familial benefit.  A couple of years after Congress enacted §132, airline labor unions succeeded in getting Congress to give a more generous §132 to airline employees by extending the exclusion to their parents.  Free tickets for parents!  No tax!  The Consolidated Omnibus Budget Reconciliation Act of 1985 (COBRA), 100 Stat. 82, 319, added what is now §132(h)(3), titled “Special rule for parents in the case of air transportation.”  Again, whereas all employees get the exclusion benefit for freebies given to their spouses and dependents, airline employees get a special deal!  They get to exclude the free tickets given to their parents.

I love making my students scratch their heads over what possible deep and abiding tax policy reason Congress had for creating this special tax benefit for the parents of this one particular industry.  And then I tell them this fact:  when this legislation was in gestation, Dan Rostenkowski had two daughters who were flight attendants.  They immediately jump to the conclusion that any of us would jump to.

But Professor Newman’s article, supra, does much to dispel that conclusion.  He carefully traces the extensive lobbying efforts of flight attendant unions for parental passes to be part of the §132 exclusion, a lobbying effort that was based in part on traditional perks airlines had given employees.  Those efforts failed in the initial enactment of §132.  They succeeded two years later.  And when one looks at the other special provisions Congress created for airlines in COBRA, one sees how the special provisions for airlines reflect more traditional lobbying rather than any sly insertion by an Illinois Congressman who just wanted to fly back and forth to Chicago tax-free.  Still, one can imagine Rosty smiling.

Bryan Camp is the George H. Mahon Professor of Law at Texas Tech School of Law.  He invites readers to return each week to TaxProf Blog for another Lesson From The Tax Court.