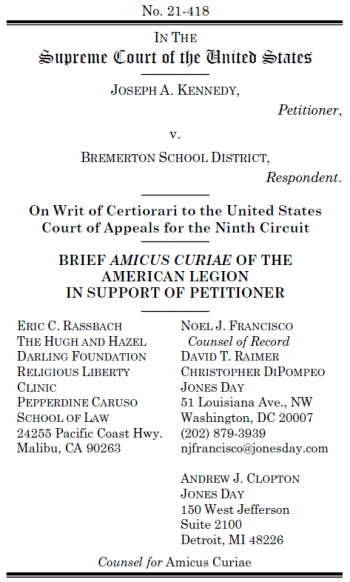 Pepperdine Caruso Law’s newly-established Hugh and Hazel Darling Foundation Religious Liberty Clinic filed an amicus brief on March 2 at the United States Supreme Court in support of Coach Joseph Kennedy’s appeal against Bremerton School District. The friend of the court brief was submitted on behalf of national veterans’ organization The American Legion. Kennedy, an assistant high school football coach, was fired by the Seattle-area school district because he engaged in private prayer on the football field after games. The Clinic’s brief argues that the First Amendment protects the right of government employees to engage in personal prayer in public places.

The brief was drafted in part by Caruso Law third-year students Anne McCarthy and Seth Shepherd, along with attorneys from global law firm Jones Day, including Noel Francisco, former Solicitor General of the United States.

“It has been a privilege getting to work with and learn from the attorneys at Jones Day,” said McCarthy. “I am glad that we could do our part to protect a robust role for religious expression in the public square.”

“Working on this brief has been one of the highlights of my education at Pepperdine,” said Shepherd. “I am proud that we have been able to make a difference on such an important case, and as someone set to become a Marine Corps Judge Advocate after graduation, I am particularly proud that the clinic is representing the American Legion.”

“Football fields are not religion-free zones,” said Eric Rassbach, visiting professor at Pepperdine and inaugural executive director of the clinic. “The school district got the Constitution exactly backwards by banning prayer instead of allowing it as the First Amendment requires. We hope the Supreme Court throws the yellow flag on this flagrantly unconstitutional behavior.”

This is the first brief filed by the new clinic at Pepperdine Caruso Law, established in January 2022 with the help of a transformational gift from the Hugh and Hazel Darling Foundation. As part of the school’s Nootbaar Institute for Law, Religion, and Ethics, the Religious Liberty Clinic explores enduring questions relating to how civil governments treat the religious beliefs, expressions, and institutions of their citizens and residents. “Faith is at the very core of Pepperdine’s mission,” said Dean Paul Caron. “The new Religious Liberty Clinic is a natural extension of our work, and empowers us to make an even greater impact with our faculty and students in matters of faith and the law.”

Rassbach, vice president and senior counsel at the Becket Fund for Religious Liberty, serves as the inaugural faculty director of the clinic, joining Caruso Law’s Brenden Mann Foundation Chair in Law and Religion, Professor Michael Helfand, in conducting the seminar-style course. Students enrolled in the clinic have the opportunity to participate in advocacy in matters of religious freedom, working in pairs under the supervision of attorneys from Jones Day.

The amicus brief was written by Jones Day attorneys Noel Francisco, David Raimer, Christopher DiPompeo, and Andrew Clopton, along with Rassbach, McCarthy and Shepherd. "I am incredibly proud of our students' work and excited for the opportunity they have to not only collaborate with the incredible team at Jones Day, but also to weigh in on such important cases centered on the crossroads of law and faith,” said Helfand.

Joseph A. Kennedy vs. Bremerton School District will be argued at the Supreme Court in April. The Court’s opinion on the case is expected by the end of June.