Washington Post op-ed:  He Left a Lucrative Law Career to Become a College Basketball Coach. Now He’s in the Big Dance, by John Feinstein (author of 42 books, including The Back Roads to March: The Unsung, Unheralded, and Unknown Heroes of a College Basketball Season (2021), which profiles Longwood University basketball coach Griff Aldrich among others): 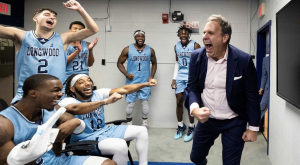 It wasn’t until there were 63 seconds left and his team had a 21-point lead Sunday afternoon that Griff Aldrich finally admitted the inevitable: His team was going to the NCAA Division I men’s basketball tournament for the first time. ...

One of the people least surprised to see Aldrich’s demeanor was his best friend from college, Utah State Coach Ryan Odom, who calls him “a nervous Nellie.”

“It’s part of who he is,” Odom said by phone Sunday. “He’s always prepared. He’s always worried about something that isn’t perfect. He’s really passionate. But his most important quality is that he’s always been concerned first with having a positive effect on his players’ lives.”

That may sound like coaching pablum, but Aldrich has lived by that creed since he was practicing law and coaching AAU basketball in Houston — before a dramatic career change that culminated with Sunday’s win.

So there were a lot more hugs and some tears when Longwood finished off its 79-58 victory over perennial Big South power Winthrop to claim the conference’s tournament title. The Lancers are 26-6 and have won 19 of their past 20 games. They will be at best a No. 15 seed when the brackets go up this coming Sunday. ...

Aldrich graduated from Hampden-Sydney, a Division III school about six miles from Longwood, in 1996. As a senior, he was team captain but only played 10 games because he was diagnosed the previous summer with bladder cancer. Aldrich had applied to law school as a senior ... and got into the University of Virginia’s law school.

After finishing in 1999, he still wanted to coach, so he went to work at Hampden-Sydney for Tony Shaver, who had been his college coach. The Tigers, a Division III powerhouse, went 26-2 that season, losing by a point in the second round of the D-III tournament.

But Aldrich still had law school student loans to pay off. So when big-time Houston firm Vinson & Elkins offered him a job making six figures, he took it. “The idea was to pay off the loans and then get back into coaching,” he said. “Plans change.” 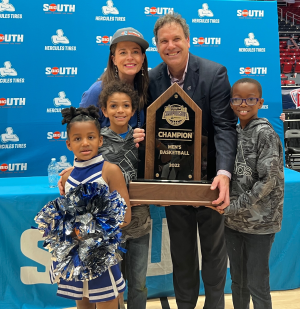 His changed in part because he met his future wife, Julie Wareing — who was born and raised in Houston — and because he became so successful and well-established it seemed impossible to leave. He became a partner. He and Julie left their house in a high-end neighborhood and moved into downtown Houston after returning from a four-year stint in London. They adopted three kids from Houston — two boys and a girl — who are now almost 11, just-turned 10 and 7. Eventually he founded an oil and gas company and became the managing director and chief financial officer of a private investment firm.

He also created an AAU team called HIS Hoops — Aldrich is a devout Christian — not to travel the country and attract college coaches but to help inner-city kids. After-school practice started every day with study hall and often ended at the Aldriches’ house for dinner. ...

He was making close to $800,000 per year, happily married with three kids and getting his basketball fix with HIS Hoops when Ryan Odom was hired at Maryland Baltimore County in the spring of 2016. Aldrich was 42. He still wanted to be a full-time basketball coach. So he called his old college buddy.

“I thought he was joking at first,” Odom said. “I mean, I knew how successful he’d been, and I knew he and Julie loved living in Houston.”

Aldrich wasn’t joking. “I have one spot left,” Odom finally said. “It’s the director of basketball operations job. I can pay you $32,000 a year.”

“The key to the whole thing was Julie,” he said. “She’d lived in Houston her whole life, and we had to uproot with three young kids to move to Baltimore. We were fine financially, but the difference in salary had to be kind of a shock to her system. Mine, too.”

UMBC became part of basketball history in 2018, when it upset Vermont in the final of the America East tournament and then stunned top-seeded Virginia, 74-54, in the round of 64 in the NCAA tournament, becoming the first No. 16 seed to beat a No. 1 seed in 136 attempts. ...

“I wouldn’t describe Griff and I as criers,” Odom said. “But we cried after the Vermont game. Beating them was so hard. The Virginia game was different. It was surreal.”

It was also life-changing for Aldrich. Longwood, which had been in Division I since 2007, was looking for a new coach, and school president W. Taylor Reveley IV was aware of Aldrich even before the Virginia upset. A former Princeton football player, he had overlapped with Aldrich at Virginia’s law school, even though they hadn’t known each other. Their interview had to be postponed twice because UMBC kept winning games it wasn’t supposed to win, but when they finally sat down Reveley offered Aldrich the job. He got a huge raise, jumping to $150,000 per year — still a fraction of what he had been making in Houston.

The Lancers — whose greatest player was the late Jerome Kersey and who won just seven games the season before Aldrich was hired — improved right away, winning 16 games in Aldrich’s first season, including beating High Point, coached by Tubby Smith, twice. “Got to be one of the great coaching matchups of all time,” Aldrich said before the first of those games. “Tubby with 606 wins and a national title, me with 12 wins and a law degree.” ...

While Aldrich waited to do the postgame TV interview Sunday, he noticed the joy on all the faces of Longwood’s players and staffers. “I felt myself starting to tear up,” he said. “Then Julie came out to hug me. That was it. Waterworks. All over the place.”

Finally, for a moment, the nervous Nellie replaced anxiety with happiness. Twenty-three years after graduating from law school, he has found his niche.