Law.com, Every Black Law Dean in the US Signs Letter to Senate Supporting Jackson's SCOTUS Nomination: 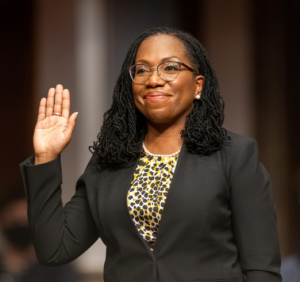 All 40 Black law deans from law schools across the country united to send a letter to the U.S. Senate on Thursday expressing support for Judge Ketanji Brown Jackson’s nomination to the U.S. Supreme Court.

“To see all Black law deans speaking with one voice at an historic time is a particularly important indicator,” Dayna Bowen Matthew, dean and Harold H. Greene Professor of Law at the George Washington University Law School, told Law.com on Wednesday. ...

Matthew explained why it’s so powerful for deans to show their support for Jackson.

First, deans are scholars, who know all substantive areas of the law, Matthew said.

Secondly, “deans are practitioners, who have spent time before judges, and understand what qualities, character, integrity and temperament of a judge must be,” she said.

Third, Matthew continued, “deans are the leaders of the academy who are responsible for training lawyers charged with the vision of protecting democracy, equipping the future judges, CEOs, legislators, city council who will be protecting corporations, organizations and government.”

“We are uniquely situated to look at Judge Jackson holistically, substantively, historically to conclude she will make an outstanding associate justice of the United States Supreme Court,” Matthew added.