A Young Father With Terminal Cancer Asks: Does My Son Know You?

Jonathan Tjarks (The Ringer), Does My Son Know You?: Fatherhood, Cancer, and What Matters Most: 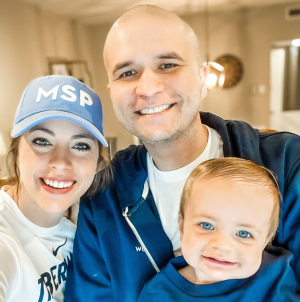 I got scanned for the first time last April. That’s when I found out I had cancer. I had been in and out of the hospital for two months. The doctors couldn’t figure out what was wrong because what I had (a Ewing’s-like sarcoma with a BCOR-CCNB3 rearrangement) is so rare. Sarcomas are small tumors found in the bones and connective tissues of the body. They represent about 1 percent of new cancer cases in the United States each year among adults, and BCOR is an even tinier part of that 1 percent. The odds of me getting it were about 25 million to 1. My wife and I ran into a doctor who is friends with her parents. He asked how it felt to get hit by lightning.

Sarcomas are one of the deadliest kinds of cancers. The five-year survival rates for adults with metastatic Ewing’s sarcomas are between 15 percent and 30 percent. Metastatic means the tumors have already spread through the body by the time they are diagnosed. There were too many for the doctors to count on my first scan. ...

Being diagnosed with terminal cancer doesn’t happen like it does in the movies. The doctors don’t actually tell you how long you have to live. They can’t predict the future. What they say is: What you have will kill you at some point. We just don’t know when. It could be months. It could be years. It could be longer.

The only real hope they can offer is that someone might find a cure before it’s too late. All they can do for now is keep me alive as long as they can. ...

[I]t leaves you with a lot of time to think. I usually end up thinking about my son.

His name is Jackson. He was born in late March 2020. ... He’s now almost 2, which is a really fun age. We can communicate with him. He learns a new word almost every day.

Being a dad has been the greatest joy of my life. I was never someone who debated about whether or not to have a family. It’s something that I had wanted ever since I was a kid. I wanted what I didn’t have.

My dad was diagnosed with Parkinson’s disease when I was 6. Most people know Parkinson’s from Muhammad Ali or Michael J. Fox and the shaking they see. But that’s only the beginning. Parkinson’s gradually robs you of your ability to control your body. My dad went from needing a cane to walk to a back brace and then a walker and finally a wheelchair. Things really went south after he had open heart surgery. His body never recovered. He had to take so much medicine that it became hard to talk. He was there but he was no longer there.

I was 12. That’s the age when your parents go from authority figures to actual people. That never happened for me and my dad. We never got to know each other. What did he like doing? What were his experiences growing up? What were his goals in life?

And there’s the simpler stuff too. How do you tie a tie? Or grill a burger? Or fix a car?

I had to figure it all out on my own. Now it looks like my son might have to do the same. It was the one thing that I never wanted for him. ,,,

[My Dad's friends were] supportive at first. They brought us food, drove him places, and got him in and out of the car. But those visits slowly dried up over time. My dad kept getting sicker and could no longer do the things that had made them friends in the first place. People moved, or had kids, or got busy at work. Even the Christmas cards stopped coming. By the end, the only people who stopped by the house were nurses and health care workers.

My dad died when I was 21. There were a bunch of people at his funeral whom I hadn’t seen in years. They all told me how sorry they were and asked whether there was anything they could do. All I could think was I don’t know any of you. I know of you. I’ve heard your names. But I don’t know you.

The lie that society tells us is that our friends can be our family. That’s the premise of TV shows like Friends, Seinfeld, and How I Met Your Mother. We can all leave our hometowns behind and have exciting adventures in the big city with people that we meet. And those people will love us and take care of us and be there for us.

But life is more like what happened to the actual actors on Friends. Their TV reunion was the first time all six had been together in years. They still cared about each other to a degree, but they had grown apart. They were living in different cities and working different jobs and had a million different things happen to them that they didn’t share as a group. It couldn’t be the same as it was when they were all single and working on the same TV set.

Americans tend to put our careers first and move around the country. That’s what my parents did. My dad was from Nebraska. My mom is from the Philippines. I grew up in Dallas. That’s a long way from their families (although one of my mom’s sisters ended up moving here). My parents tried to form a community where they lived, but they didn’t really have one. Not one that lasted.

I was nervous the first time I went to a life group. I’d joined a church the week before and one of the pastors, a guy a few years older than me, invited me. It was a smaller group of people who met at his house every week. ...

That was seven years ago. Some of those strangers from the house that first night are now some of my closest friends. It didn’t happen overnight. It took me a long time to feel comfortable. I usually came after the life group had already started and left as soon as it was over.

But I was seeing the same people every week and I was telling them about my problems and they were telling me about theirs. Do that for long enough and you become friends. You get to know enough people that way and life group goes from being an obligation to something you look forward to.

Making the commitment to come every week is still hard. There are always other things to do. Sometimes you are tired or you had a long day or you just don’t feel like it. It gets even harder once you get married and have kids. ...

I can’t imagine not being in a life group at this point. Human beings aren’t supposed to go through life as faces in a crowd. It’s like the song from Cheers. Sometimes you want to go where everybody knows your name.

Life group is a different kind of insurance. People talk a lot about medical insurance and life insurance when you get sick. But relational insurance is far more important. I didn’t need my dad’s money, but I could have used some of his friends.

I wish I could say that getting diagnosed with cancer has brought me closer to God. That my faith is stronger than ever before and that it has comforted me through these tough times. I have read plenty of stories like that. But that’s not really how it has worked for me.

I want to believe in a miracle. There have been people with stage IV sarcomas whose tumors never came back. No one knows why. Some things are still beyond the knowledge of medical science. I asked my doctor if I could be one of those people. He replied, “I am not the one who decides those things.”

I believe in a God who does. But I also know that He has chosen not to heal me. At least not yet. And that hurts.

The only thing I can say is that there was never a promise that it would be any other way. ...

I have already told some of my friends: When I see you in heaven, there’s only one thing I’m going to ask—Were you good to my son and my wife? Were you there for them? Does my son know you?

I don’t want Jackson to have the same childhood that I did. I want him to wonder why his dad’s friends always come over and shoot hoops with him. Why they always invite him to their houses. Why there are so many of them at his games. I hope that he gets sick of them.

Jonathan Tjarks, The Long Night of the Soul: A Story of Facing Fear, Confronting Mortality, and Turning to Faith (May 20, 2021)

David and Curtis are honored this week to share the microphone with Jonathan Tjarks, famed NBA beat writer and podcaster for The Ringer. Jonathan’s recent piece “Does My Son Know You?” was a rare moment of candid sharing and distilled wisdom in light of his recent cancer diagnosis. This is truly a must listen as Jonathan shares a poignant perspective on faith, family and the power of community.