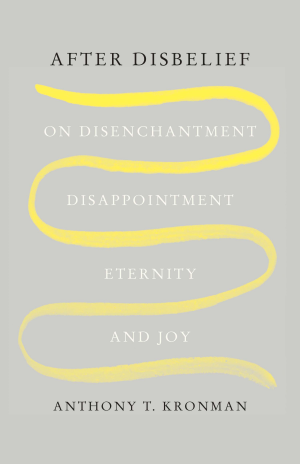 Anthony Kronman grew up in an atheist household. Now he’s determined to convince American elites of the existence of ‘divinity.’

Was it divinely ordained that a boy raised by aggressively atheist parents would one day, in his eighth decade, make a passionate public case for God? This mischievous thought crosses my mind as I speak to Anthony Kronman, whose book After Disbelief: On Disenchantment, Disappointment, Eternity and Joy, forthcoming in March, aims to persuade America’s “relentlessly rational” elites to acknowledge the existence of “divinity.”

Those elites include his colleagues at Yale Law School, where Mr. Kronman, 76, is a professor and former dean. “In the academic circles in which I live and work,” Mr. Kronman writes, “the only respectable view of God is that he doesn’t exist.” He elaborates in an interview, saying that they regard his public professions of spirituality with “skeptical bemusement.” To the extent religion figures in their conversations at all, “it often does so as a synonym for prejudice and superstition—the attitude [Barack] Obama expressed, in an unguarded moment, when he made his regrettable comments about ‘guns and religion’ ” while seeking the Democratic presidential nomination in 2008.

Mr. Kronman’s ambition is to repair “the schism between those for whom religion continues to matter and those who view it with amusement or contempt.” The political implications of this split are especially profound in America, which Mr. Kronman says is unlike any other country in both its “commitment to secular values” and the “seriousness with which it takes religious beliefs.” The combination of the two has frequently been a source of national strength, but in recent decades it has given rise to hostility and bitterness.

“After Disbelief” approaches the problem by giving each side its philosophical due. Mr. Kronman argues that the scientific conviction that everything in the world is “knowable and explicable” collides with the practical reality that we can never know everything—that the questions are “inexhaustible” because new ones arise from every answer. ...

Mr. Kronman, by contrast, comes to God by pondering science and its limits. Science explains the world in terms of cause and effect: “The idea of a cause is that of a necessary connection. To be sure, we can never empirically demonstrate that such a connection exists. All we are ever able to show is that two things are correlated.” ...

“This is the scientific method,” Mr. Kronman says. “It is how science progresses.” Yet science is pursuing an unreachable goal: “It strives to show why things do not merely happen in an observable sequence but could not have happened in any other way.” That makes science “the experience of perpetual progress coupled with inevitable defeat.”

Hence the leap of faith: “The order that science seeks to comprehend,” Mr. Kronman believes, is “unconditional and therefore eternal”—in other words, divine. God’s will is infinite, but contrary to Christian theology, it isn’t off-limits to scientific inquiry. In this light, science is a sort of holy pursuit: Understanding God and understanding the world are one and the same quest.

Mr. Kronman, who says his ideas draw on those of Aristotle and Baruch Spinoza (1632-77), describes himself as a “born-again pagan.” That may sound irreverent, but he clearly feels more spiritual kinship with traditional believers than with his secular colleagues. His fishing partner on Block Island is a devout Catholic. “When we’re fishing, we argue fiercely about religion. We disagree but take the subject seriously. That’s something I miss in the faculty lounge.” ...

His book, he says, addresses two sets of readers. The first is those who believe that secularism and science are “incompatible” with religion; the second, those who have left the churches in search of some other form of spirituality, “one that is more consistent with modern beliefs.”

An intimate, philosophic quest for eternity, amidst the disenchantments and disappointments of our time

Many people of faith believe the meaning of life depends on our connection to an eternal order of some kind. Atheists deride this belief as a childish superstition.

In this wise and profound book, Anthony Kronman offers an alternative to these two entrenched positions, arguing that neither addresses the complexities of the human condition. We can never reach God, as religion promises, but cannot give up the longing to do so either. We are condemned by our nature to set goals we can neither abandon nor fulfill, yet paradoxically are able to approach more closely if we try. The human condition is one of inevitable disappointment tempered by moments of joy.

Resolutely humanistic and theologically inspired, this moving book offers a rational path to the love of God amidst the disenchantments of our time.

“In this deceptively quiet and self-effacing book, Anthony Kronman makes an audacious argument: the most important things in our lives make sense only if we believe the world is divine. In a sense, we already believe it, if only we could find the words. Here they are.”—Jedediah Britton-Purdy, author of After Nature: A Politics for the Anthropocene

“Boldly transcending the debate between traditional theism and traditional atheism with verve, precision, and insight, After Disbelief offers a radically humanistic vision that neither abandons eternity nor falsely promises its attainment. Affirming the longing for eternity as central to the human condition and the wellspring of our desire to know and to love what can never be finally known or loved, Kronman provides a compelling vision of the twinned experience of disappointment and joy that awaits us on the other side of disbelief.”—Christine Hayes, Yale University

“Kronman takes up Paul Tillich’s challenge that we put aside traditional understandings of God (‘perhaps even that word itself’) to focus solely on the depth of our being. Then, he offers an account of the ‘inherently and infinitely divine’ that all who truly seek meaning in life must take seriously.”—John Sexton, President Emeritus of New York University and bestselling author of Baseball as a Road to God “Anthony Kronman’s deeply personal After Disbelief offers a thoughtful response to the doubt and uncertainty that are driving so many people to the brink of despair. His salvific vision points the way to renewed belief, commitment, and hope that sustain the endless struggle for progressive ideas and ideals.”—Mark C. Taylor, Columbia University

"Tony Kronman’s rare book After Disbelief is a profound achievement. One can think of very few authors who reach such scope and wisdom."—Moshe Halbertal, New York University