College and University Professional Association for Human Resources, Women in the Leadership Pipeline in Higher Education Have Better Representation and Pay in Institutions With Female Presidents and Provosts:

At most higher education institutions, the two most senior positions are the president and provost. Advancement to these roles most often follows a straightforward path. More than one-third (34%) of presidents were in a provost or vice provost role immediately prior to becoming president, and one-fourth (25%) were presidents at a different institution. For provosts, the most common prior role is that of dean (45%), followed by vice provost (24%) and provost at another institution (14%). Typically, deans are promoted to their positions from a senior faculty role. Therefore, a common path to the senior-most executive positions in higher ed is promotion through the faculty ranks to senior faculty level, securing a position as dean, and then obtaining a position as provost or president.

Prior research shows that women are both underrepresented and underpaid in most higher ed leadership positions. Previous research has also shown that having women in executive positions in the nonacademic, corporate workplace narrows the pay gap between female and male administrators. This report analyzes whether institutions with women presidents or provosts have higher representation and pay for women in administrative, dean, and faculty positions than institutions led by men.

Although female deans and faculty are paid less than male deans and faculty, provost sex does not have a strong or consistent impact on pay equity for deans and faculty. However, it is worth noting that better representation at higher faculty ranks and in dean positions has an impact on pay. Note that the representation of women drops with successive faculty ranks (from assistant to associate to full professor). These promotions represent the few times in a faculty member’s career when appreciable salary increases are granted. If women are not being promoted, they are not receiving these pay raises. In addition, those in dean positions are generally promoted from senior faculty ranks. Therefore, if women are not adequately represented in senior faculty, they will not have the same likelihood as men of being considered for a higher-paying dean position. 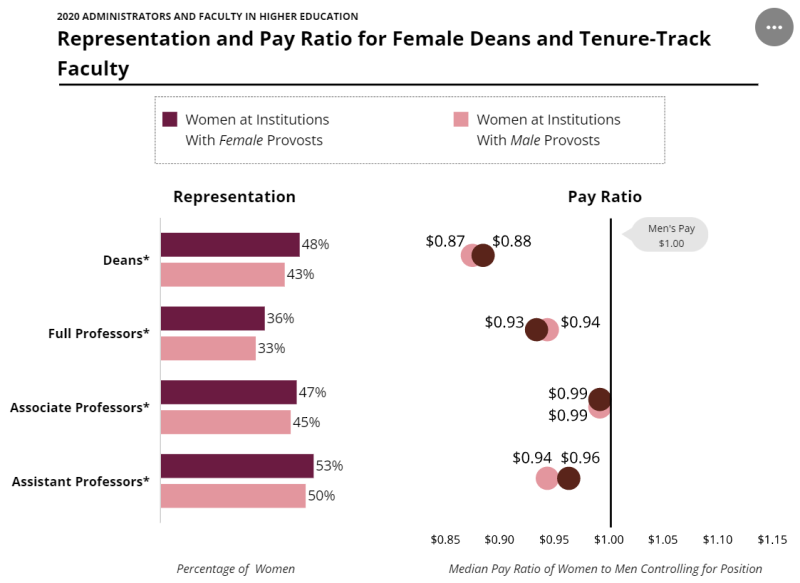