Following up on my previous posts (links below):  New York Times, Georgetown Suspends Lecturer Who Criticized Vow to Put Black Woman on Court:

Georgetown University’s law school placed a newly hired administrator on leave on Monday after he said on Twitter that President Biden would nominate not “the objectively best pick” but a “lesser Black woman” to be the next Supreme Court justice. ...

In an email to the law school, whose formal name is the Georgetown University Law Center, its dean said on Monday that the university would investigate whether Mr. Shapiro had violated any of the school’s policies on professional conduct, nondiscrimination and anti-harassment.

“Over the past several days, I have heard the pain and outrage of so many at Georgetown Law, and particularly from our Black female students, staff, alumni and faculty,” the dean, William M. Treanor, said. “Ilya Shapiro’s tweets are antithetical to the work that we do here every day to build inclusion, belonging and respect for diversity.”

In an email to The New York Times on Monday, Mr. Shapiro expressed regret over his tweets, but he maintained that they were not grounds for disciplinary action by the law school.

“I’m optimistic that Georgetown’s investigation will be fair, impartial and professional,” Mr. Shapiro said. “And I’m confident that it will reach the only reasonable conclusion: My tweet was inartful and undermined my antidiscrimination message, which is why I apologized. It was not, however, a violation of any university rule or policy, and indeed is protected by Georgetown policies on free expression.” ...

In announcing the decision to place Mr. Shapiro on leave, Professor Treanor said that Mr. Shapiro would not be on campus while the law school conducted its investigation.

“Racial stereotypes about individual capabilities and qualifications remain a pernicious force in our society and our profession,” Professor Treanor said. “I am keenly aware that our law school is not exempt.” 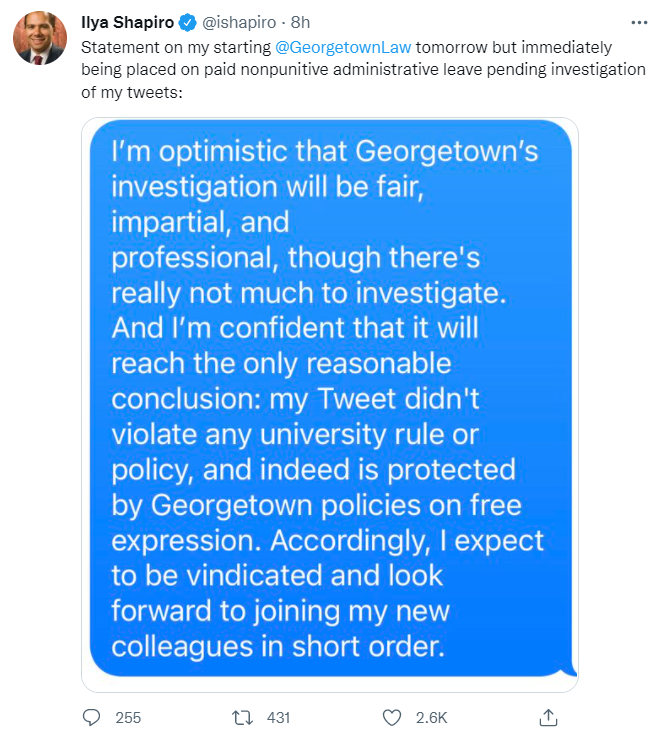