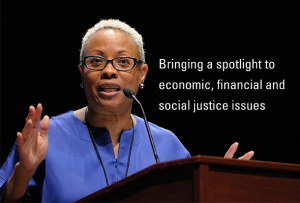 Dorothy A. Brown, Asa Griggs Candler Professor of Law at Emory University School of Law, examines how federal tax policy disadvantages Black Americans in her latest book The Whiteness of Wealth: How The Tax System Impoverishes Black Americans – And How We Can Fix It. In her upcoming lecture “The Making of The Whiteness of Wealth: How Institutions Shape Academic Thought,” Professor Brown will discuss her research and the process leading to its results. This event, the 2022 Robert S. Marx lecture, will be held at 12:15 p.m., Monday, Feb. 21, via Zoom.

About the Lecture
Professor Brown’s decades of research looking at the role of systemic racism in federal tax policy ultimately found that when Black and White Americans engage in the same behavior, tax law benefits White Americans while disadvantaging Black Americans. The underlying research received varying types of institutional support. The different types of support led to an evolving research agenda that ultimately resulted in the publication of The Whiteness of Wealth: How The Tax System Impoverishes Black Americans – And How We Can Fix It.

About the Lecturer
Dorothy A. Brown was born and raised in the South Bronx in New York City and learned about structural inequality at an early age. Now an Asa Griggs Candler Professor of Law at Emory University where she teaches a variety of tax courses, she is the author of The Whiteness of Wealth: How The Tax System Impoverishes Black Americans – And How We Can Fix It (Crown 2021). A nationally recognized scholar in the areas of race, class, and tax policy she is also the author of numerous law review articles, book chapters, and essays on the topic. She is also the author of Critical Race Theory: Cases, Materials, and Problems (3rd Edition 2014 West Academic) and a co-author of Federal Income Taxation (West Academic 2019, 7th edition). She majored in accounting at Fordham University, received her law degree from the Georgetown University Law Center and her LLM in Taxation from New York University. She has appeared on CNN, MSNBC, PBS, and NPR and her opinion pieces have been published in The New York Times, The Washington Post, The Atlantic, Forbes, and CNN Opinion.