Weekly SSRN Tax Article Review And Roundup: Elkins Reviews Infanti's Tax And Time: On The Use And Misuse Of Legal Imagination 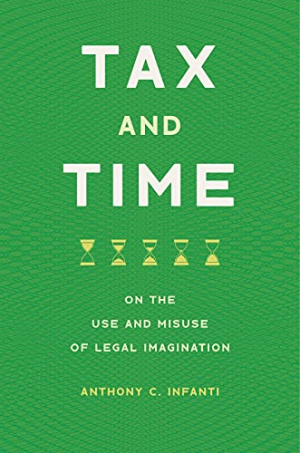 Time is one of the more perplexing phenomena of the universe. Astrophysicists distinguish between what they call “real time” (time as we experience it, as a series of continuous moments moving from the past to the future) and “imaginary time” (time as viewed from outside the time-space continuum, as a unitary whole with past, present, and future existing simultaneously). However, lest we misinterpret the terms, real time is not more real than imaginary time, and imaginary time is not more imaginary than real time. The terms “real” and “imaginary” simply refer to the real and imaginary axes in Cartesian complex number coordinates. In fact, in ordinary language, it is probably more accurate to describe imaginary time as “real” (an objective portrayal of the universe) and real time as “imaginary” (our psychological perception of the flow of time). One example of the complexities that arise in this field is the conundrum of the arrow of time: Why do we remember the past, but not the future? Why do we experience time as always flowing in one direction? The arrow of time has intrigued philosophers also. Why is the knowledge that I am to experience future pleasure preferable to the knowledge that I experienced past pleasure? Why is knowledge that I am to experience future pain more disconcerting than the knowledge than I experienced pain in the past?

Fascinated as I am by such topics, I could not help but immediately be intrigued by an article entitled Tax and Time. It turned out that the post was not an article but rather the introduction to an entire book devoted to the subject of time and taxation. But if one purpose of an introduction is to whet the reader’s appetite for the complete work, then at least in that respect it admirably accomplished its goal.

As described by Professor Infanti, the concept of time is an essential element of taxation and, in particular, income taxation. He considers all the usual suspects – from the annual accounting period to the time value of money – but does so by examining them from the perspective of how they embody the very concept of time. For example, he mentions that in a number of circumstances – such as capital recovery or instances in which the taxpayer effectively exchanges time for tax benefits – time is reified and acquires the attributes of a tradable commodity. To these he adds subjects that one does not ordinarily think of as concerning the effect of time on taxation, such as statutory interpretation and the doctrine of substance over form, and suggests that effectively rewriting a statute reverses the ordinary temporal order of causation.

The ideas expressed by Professor Infanti are to my mind extraordinarily thought provoking and after reading the introduction to his book, I thought of a number of instances in which tax law appears to deviate from what he refers to as “linear time.” For example, when a corporation redeems all of a shareholder’s shares, the redemption is entitled to sales (as opposed to dividend) treatment, even if the shareholder’s close family members continue to hold shares in the corporation, provided that the shareholder does not acquire a “prohibited interest” in the corporation for ten years. In other words, the acquisition of a prohibited interest can retroactively change the tax treatment of a redemption that occurred almost a decade earlier. In my own writing in the field of corporate taxation, I have described the distribution of accumulated earnings and profits as following the rule of “real time,” while the distribution of current earnings and profits follows the rule of “imaginary time.” In accordance with the rule of real time, events unfold on a day-by-day basis. Thus, accumulated earnings and profits are calculated as of the moment of distribution and are allocated on a first come, first served basis. In accordance with the rule of imaginary time, all of the events occurring during the current year are treated as having occurred at a single instant. Thus, the entire year’s earnings and profits are available for distribution from the first day of the year and, in the case of multiple distributions during the year, are allocated proportionally among them. I would be very interested to hear Professor Infanti’s thoughts about these examples and whether they accurately reflect the ideas in his book.

I hesitate to say that I look forward to reading the full book when it is published, only because such sentiments reflect a slavish adherence to the concept of linear time. I am certain, however, that it will be (is) fascinating reading.