The 26 Law Schools With Tuition Discount Rates Greater Than 50%

The percentage of students getting scholarships rose from 50% in 2011 to nearly 80% by 2020. And the dollar figure — an average of more than $25,000 last year for private schools — continues to grow, according to a National Jurist Magazine analysis.

Indeed, annual net tuition — the amount remaining to be paid after scholarships have been subtracted — has been trending downward for years. At private law schools, it went from $30,278 in 2015 to $29,051 in 2020, which is an 8.5% drop when inflation is accounted for, according to the National Jurist analysis. This has happened even though actual tuition — the sticker price — has gone up.

Here are the 26 law schools with tuition discount rates over 50%: 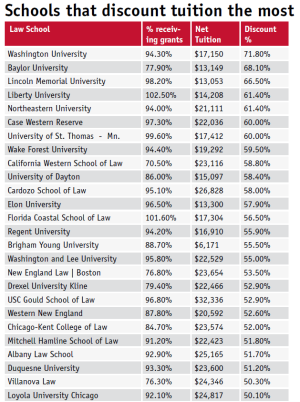 Jerry Organ, one of the paper’s authors, posted the following on TaxProf Blog in 2020, spelling out the scholarship trend: “What is the simple story between 2010 and 2016? In the face of a declining applicant pool, and an applicant pool that also weakened in terms of the LSAT composition of the applicant pool, law schools became much more competitive in trying to attract students, particularly students with stronger LSAT/GPA profiles, by greatly increasing their scholarship offers.” 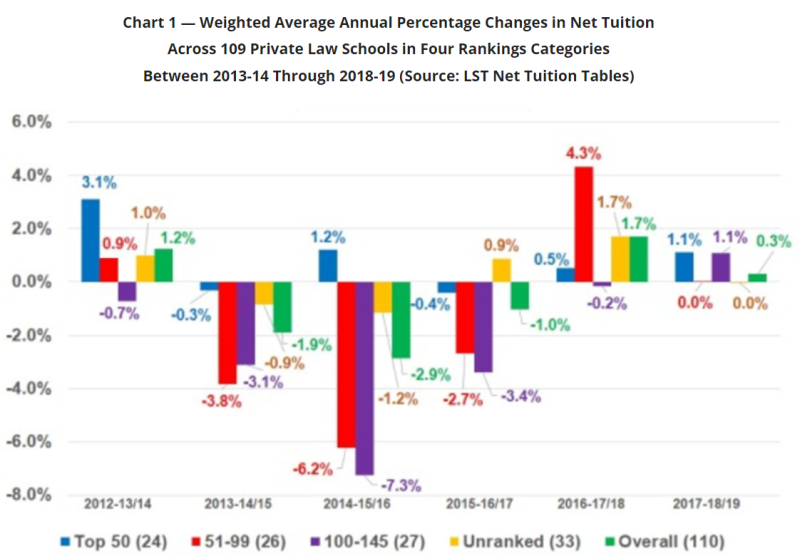