In 1980, one-third of law students and only 14% of all law teachers were female, and a mere 9% of students and 4% of faculty were identified as non-white. Today, law faculties are more diverse by gender and race/ethnicity. Yet, the demographics of faculty subgroups diverge widely and, importantly, faculty remain less diverse than their students.

Focusing principally on law clinic and field placement teachers (full time, excluding fellows), over two-thirds identified as female (cis or trans) in the latest 2019-20 Center for the Study of Applied Legal Education (CSALE) survey. The graph below reflects a trend of increasingly female clinical faculty beginning in the late 1980s/early 1990s and continuing through all five tri-annual CSALE surveys:[1] 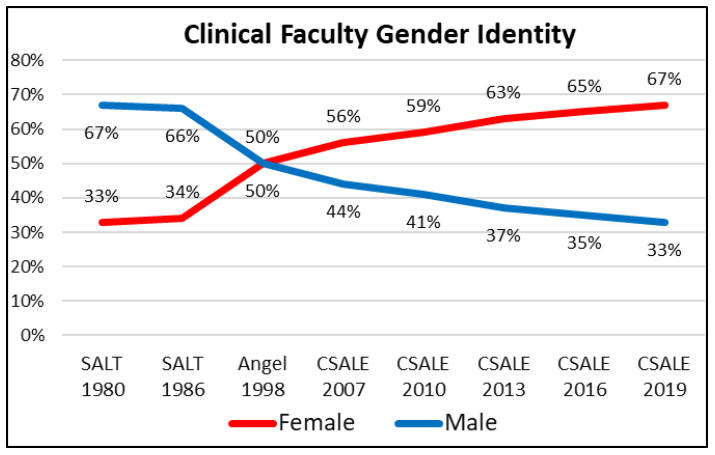 Newer clinical teachers are even more predominantly female ─ 73% of those teaching three years or less are female. Within clinical teaching areas, those who primarily teach field placement courses are more predominantly female than those who primarily teach in a law clinic — 82% of field placement teachers are female compared to 65% of clinic teachers. 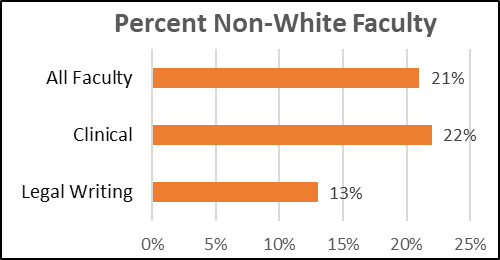 In sum, while the diversity of law school faculty has been increasing over the past four decades, it still lags behind the gender and racial/ethnic diversity among students. And even though schools are hiring increasingly more female faculty, women continue to be disproportionately hired into traditionally lower status/lower paying clinical and legal writing positions.[5] There may be no easy fix to these issues, but the first step towards addressing them is to be aware of the numbers.

[2] The 2020 ABA annual reports identified 4,399 female and 4,986 male full-time faculty (5 reported as “other”). Removing 1,157 female clinical teachers (67% of the 1,727 full-time clinical faculty reported by the 95% of schools that participated in the CSALE survey) and 649 female legal research and writing teachers (70% of the 927 full-time LRW faculty at the 169 of 203 ABA schools that participated in the 2019-20 ALWD/LWI Legal Writing Survey) results in 2,593 full-time female non-clinical/non-legal writing faculty. Further removing 848 male faculty identified in the CSALE and ALWD/LWI surveys results in 38.5% full-time non-clinical/non-legal writing female faculty. If the missing 5% of schools in the CSALE survey and 17% in the ALWD/LWI survey are accounted for, 37% of 2020 full-time non-clinical/non-legal writing faculty were female.