In Defense Of The Emory Law Journal 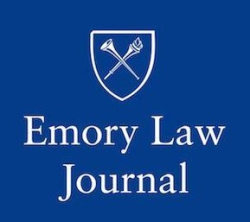 This week, there was what Jonathan Turley called a “major controversy brewing over free speech and censorship at Emory Law Journal.” Robert George argued, “It’s hard to think of a stupider, more self-defeating idea than imposing political litmus tests on articles submitted to major law reviews. But that’s what the Emory Law Journal has done, rejecting on ideological grounds an essay by the brilliant legal scholar Lawrence Alexander.”

George is wrong on every count. The Emory Law Journal did not reject Alexander’s essay. They did not declare any ideological grounds and in fact expressly stated that they would happily publish views that most of the editors disagreed with. There is no political litmus test that the Emory Law Journal has ever stated or hinted at. ... [R]evising an article is not destructive to academic values; it is the essence of academic values. This is standard operating procedure for any publication: If you refuse to make any changes, the editors can refuse to publish it. ...

The final objection of the Emory Law Journal editors was their biggest concern: “crucially, the discussion on racism is not strongly connected to your commentary on Professor Perry’s work, which is the focus of the Issue and the purpose behind the publication opportunity offered.” Obviously, a tribute to Michael Perry’s work should include critiques of his work (even if they are about an obscure essay Perry wrote forty-five years ago). But Perry never wrote about reparations, which was the focus of Alexander’s essay. ...

While we should be concerned about ideological discrimination in academia, we need to reject baseless accusations of bias about editing a badly written essay. This is an effort to intimidate student editors of a law journal into abandoning scholarly standards simply because a conservative submitted an article. ...

The attacks on the Emory Law Journal also reflect a deep misunderstanding of what academic freedom means. Robby Soave in Reason mentioned the case of Alexander’s occasional coauthor Amy Wax and wrote, “Alexander is facing an even more obvious violation of basic principles of academic freedom.” While the Wax case is a real threat to academic freedom because it involves a university punishing a professor for their views, the Alexander incident isn’t about academic freedom at all.

Academic freedom is the right not to be punished for your views unless you have violated scholarly standards and receive due process. But the failure of someone to publish you is not a form of punishment. Nobody has a right to be published free from editing.

Editors get to make judgments about articles. The judgments may be good and they may be bad, but they are not violations of academic freedom. The only academic freedom right here is the right of the editors to make editing decisions. Just like a graduate student teaching a class is protected by academic freedom, so too are the student editors of an academic journal.

The attacks on the Emory Law Journal reflect the ideological blinders of our times. So many people are convinced that conservatives are oppressed on campus that they jump to conclusions that confirm their presumptions at the first hint that some “woke” student might be concerned about “hurtful” language. But I think the details about this case show a very different picture from the initial reports, and reveal that the Emory Law Journal editors made reasonable reactions to a deeply flawed submission and were still open to publishing it.