With the ABA’s posting of the 2021 Standard 509 Reports, we have the ability to compare first-year enrollment for 2020 and 2021.  In compiling the information for this blog posting I used the data in the First-Year Class spreadsheets for 2020 and 2021. 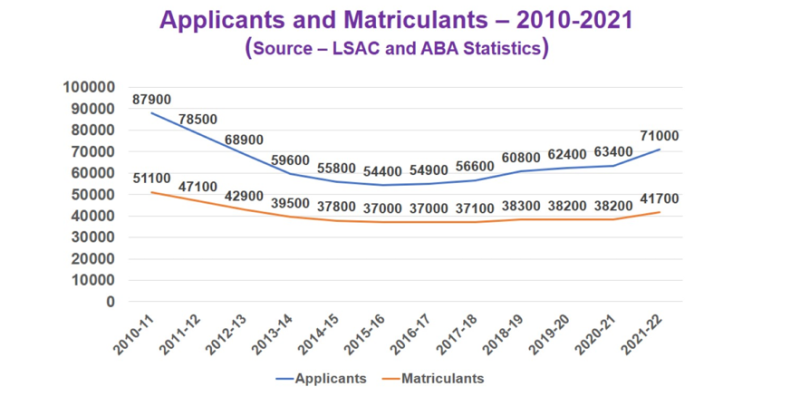 It’s easy to understand the temptation that law schools faced – particularly law schools with higher median LSATs (more on this later) – as the pool of applicants for fall 2021 grew more than 12%, from 63,400 to 71,100, with most of the growth among applicants with the highest LSAT scores.  Perhaps due to the LSAT Flex being slightly less challenging than the traditional LSAT, the 2021 applicant pool saw significant growth among those with LSATs of 170 or higher, jumping from roughly 3,500 to roughly 5,800, an increase of more than 65%.  With this larger, stronger applicant pool, many law schools likely thought they could try to grow their class (and generate more revenue) while also increasing their median LSAT.  (I will have a subsequent blog posting that looks at the LSAT composition of the entering class in 2021 compared to other recent classes.)

The challenge is that each law school, particularly in states with multiple law schools, is not acting in isolation.  A given law school may think that increasing its first-year class by 25 students will not be a problem because the regional market for legal services in three years probably will be able to absorb those 25 graduates.  But if every law school in a given metropolitan area or if most schools in a state, make the same decision, the market for legal services is not being asked to absorb 25 graduates, it may be asked to absorb 50 or 100 or 200 additional graduates.  And if most law schools in adjacent states do the same, there may be even more graduates in the region that need to be absorbed.

A couple of recent articles – here and here -- have looked at this increase in first-year enrollment by asking whether law schools with large enrollment increases will see sufficient jobs available for their graduates in three years.  These are good questions to ask, but they shouldn’t be asked with respect to individual schools alone, they should be asked with respect to employment markets which may involve multiple law schools.

Percentage of Graduates in Class of 2024 Employed in Full-Time, Long-Term Bar Passage Required or JD Advantage Jobs Likely to Decline

This significant increase in first-year students in the fall 2021 entering class likely means that, across the country three years from now, there will be roughly 4,000 more law school graduates than in the graduating classes in 2019 and 2020 (for which the entering classes were only 37,000 students).  Will there be a comparable increase in the number of full-time, long-term, bar passage required (FTLTBPR) or JD advantage (FTLTJDA) jobs waiting for these law school graduates?

Is there reason to believe the legal services market will increase the number of FTLTBPR or FTLTJDA jobs by over 11% in the next three years?  The last time the legal services market provided over 30,000 FTLTBPR or FTLTJDA jobs was for the Class of 2013, with roughly 31,300 such jobs provided for roughly two-thirds of the nearly 46,800 graduates (the largest graduating class on record).

While the legal services market may be able to absorb some of these additional graduates particularly in some markets that may see growth over the next three years, it appears very likely that the percentage of graduates in FTLTBPR or FTLTJDA employment for the Class of 2024 will drop well below 80%, perhaps to something below 75% (which would require roughly 28,800 such jobs (1,300 more than the average over the two most recent graduating classes)).

Examining the changes on a state-by-state basis, with first-year enrollment tallied across all law schools in a given state, it becomes clear that the increase in first-year enrollment is not evenly distributed across the country.  Table 1 divides states into five categories in terms of enrollment increase (or decrease).  The categories are:  More than 19% increase (10 states, with Vermont in the lead at 29.9% and Nevada on its heels at 28.1%); 12% to 18% Increase (7 states); 7% to 11.9% Increase (12 states); 0% to 6.9% Increase (16 states); and Decrease (5 states). The number of law schools in each state is shown in parentheses.

With the exception of North Carolina (with six law schools) and Alabama (with three law schools), all of the states with an increase of 19% or more in first-year enrollment are states with one law school (NH, NV, SD, VT, WY) or two law schools (AZ, NE, NJ).  The law schools in these ten states are likely to experience some significant challenges three years from now when their graduates are seeking employment.  It’s not hard to envision declining employment outcomes for a number of the law schools in these states in terms of the percentage of graduates in FTLTBPR or FTLTJDA jobs, simply because there will not be enough of those kinds of jobs in these states to accommodate this growth in graduates.

By contrast, law schools in those states with very modest increases in first-year enrollment or decreases in enrollment are likely to face far fewer challenges in helping their graduates obtain employment in FTLTBPA or FTLTJDA jobs.

Examining these trends regionally suggests that there may be geographic pockets in which the increase in first-year enrollment may not only affect employment outcomes for law schools in a given state but may have regional effects as well.

Looking more locally in the Northeast, Boston saw the largest increase for any city with multiple law schools, with an increase in enrollment of 15.1% across the six law schools located in the Boston metropolitan area (Boston College, Boston University, Harvard, New England, Northeastern and Suffolk).  Obviously, some of these are law schools with a national employment footprint, but this increase first-year enrollment across the city nonetheless is likely to present problems for some of these law schools with respect to employment outcomes for 2024 graduates.

The Southwest also is above average in terms of enrollment increases, with two states (Arizona and Nevada) in the top tier (more than 19%), Utah in the second tier (12% to 18%), and California (9.6%) above the national average. Across these four states, the average increase in first-year enrollment is 11.2%.

The other three states in which enrollment increases in 2021 suggest possible employment challenges for the class of 2024 are Texas (14.4%), Illinois (13.6%), and Kentucky (12.5%).  Indeed, Chicago, much like Boston, saw an increase in enrollment of 14% across the six law schools located in the Chicago metropolitan area (Chicago, Chicago-Kent, DePaul, Loyola, Northwestern, and UIC John Marshall). 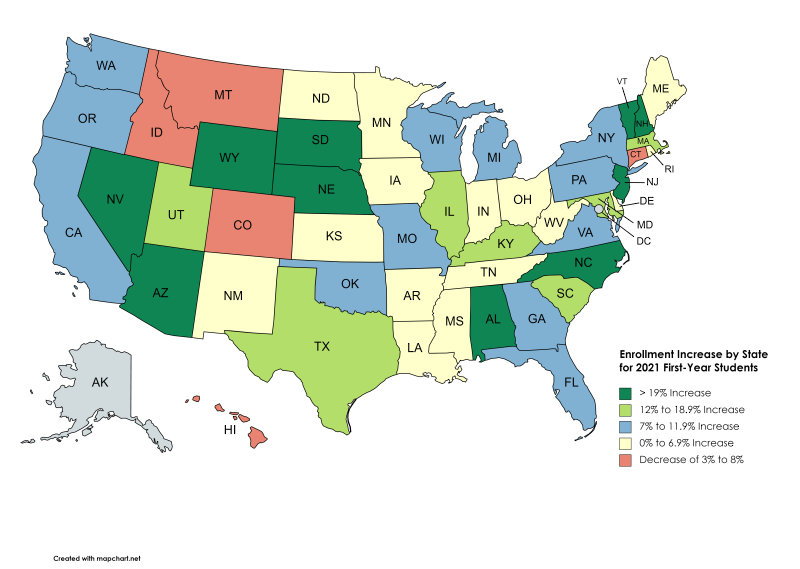 Distribution of Enrollment Increases by Law Schools Based on Median LSAT

The following paragraphs look more closely at patterns within each category of law school based on median LSAT.

There were 33 law schools in the 165+ category.  Eight had increases of 20% or more (with four above 30% (Texas (41.4%), Arizona State (38.4%), California-Davis (35.2%), and Boston College (31.2%)), 13 had increases of 10% to 19.9%, and seven had increases of less than 10%.  Five saw decreases in enrollment (including Vanderbilt (-14.4%), Georgetown (-7.9%) and George Washington (-7.5%).  Within this grouping of law schools, it seems plausible to predict that Texas, Arizona State, California-Davis and Boston College will face more challenges in terms of employment outcomes for the Class of 2024, than Vanderbilt, Georgetown and George Washington given that their smaller graduating classes will be smaller in 2024 than in 2023.  While some law schools in this category have national employment footprints, others have more regional footprints. A significant number of these law schools in the 165+ category historically have placed large numbers of their graduates in very large law firms and in judicial clerkships. There is not likely to be much growth in the judicial clerkship market.  Is it reasonable to anticipate sufficient growth in entry level positions at very large law firms to accommodate this growth in graduates in 2024? If not, some of these law schools likely will be disappointed by the percentage of their 2024 graduates landing FTLTBPR or FTLTJDA jobs.

It will be interesting to see what happens in spring 2025 when employment outcomes for the Class of 2024 are reported.

(I am grateful to Bernie Burk and Jim Leipold for helpful comments on earlier drafts of this blog.)