Quote of the Year: "Whether or not we act responsibly sometimes crucially depends on whether we believe responsibly and, thereby, shows the relevance of responsible belief." Rik Peels 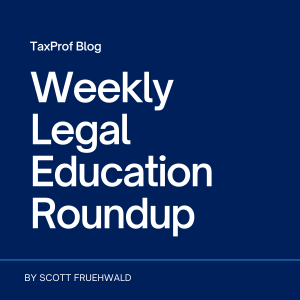 Here is my annual list of the best legal education articles of the year.

I am concerned by the significant number of law review articles today that ignore unfavorable evidence concerning the article's theories.  Case in point: Rory D. Bahadur, Law School Rankings and The Impossibility of Anti-Racism.  In this article, Professor Bahadur asserts that the U.S. News law rankings are racist based on "antiracist" theories.  Fair enough.

The problem with the article, however, is that he ignores a ton of scholarship criticizing antiracist theory.  The article gives the impression that antitracist theory is solidly established and that there is no criticism of the field.  Nothing could be further from the truth. (see here and the many articles cited therein)  This is ironic considering that Professor Bahadur accuses others of suffering from the confirmation bias ("Confirmation bias is the tendency of people to give more credence and validity to information consistent with their beliefs or hypotheses.").

Legal scholarship should not ignore unfavorable theories and evidence.  A convincing article critically examines the negative material and shows why it is wrong or not applicable.  Like so many other articles today, Bahadur's piece fails to do this.