Donald Trump and other ultrarich Americans have earned billions, but they’ve also managed to repeatedly avoid paying any federal income tax by claiming huge losses on their businesses.

[Stephen Ross] is among a subset of the ultrarich who take advantage of owning businesses that generate enormous tax deductions that then flow through to their personal tax returns. Many of them are in commercial real estate or oil and gas, industries that have been granted unusual advantages in the American tax code, which allow the ultrawealthy to take tax losses even on profitable enterprises. Manhattan apartment towers that are soaring in value can be turned into sinkholes for tax purposes. A massively profitable natural gas pipeline company can churn out Texas-sized write-offs for its billionaire owner.

By being able to generate losses — effectively, by being the biggest losers — these Americans are the most effective income-tax avoiders among the ultrawealthy, ProPublica’s analysis of tax data found. While ProPublica has shown that some of the country’s absolute wealthiest people, including Jeff Bezos, Elon Musk and Michael Bloomberg, occasionally sidestep federal income tax entirely, this group does it year in and year out.

The techniques used by these billionaires to generate losses are generally legal. Loopholes for fossil-fuel businesses date back practically to the income tax’s birth in the early 20th century. Carve-outs for real estate and oil and gas have withstood sporadic efforts at reform by Congress in part because there has been widespread support for investment in housing and energy. ...

The commercial real estate and fossil fuel breaks have enabled some of the wealthiest Americans to escape federal income taxes for long stretches of time. Sometimes they amass such large losses that they cannot use all of them in a given year. When that happens, they fill up reservoirs of deductions that they then draw down bit by bit to wipe away taxes in future years. Before ProPublica’s analysis of its trove of tax data, the extent of this type of avoidance among the nation’s wealthiest was not known.

Typical working Americans do not generate these kinds of business losses and thus can’t use them to offset income or reduce income tax.

As long as there have been income taxes, there have been schemes to manufacture illusory losses that reduce taxes, and there have likewise been counterefforts by Congress and the IRS to rein them in. But ProPublica’s findings show these measures to prevent deduction abuses “aren’t doing what they are supposed to do,” said Daniel Shaviro, the Wayne Perry Professor of Taxation at New York University Law School. “The system isn’t working right.” ...

Former President Donald Trump, for whom Ross hosted a $100,000-a-plate fundraiser in 2019, is perhaps the best-known example of commercial real estate’s tax beneficiaries. As The New York Times reported last year, Trump paid $750 in federal income taxes in 2016 and 2017, and nothing at all in 10 of the years between 2001 and 2015. According to ProPublica’s data, Trump took in $2.3 billion from 2008 to 2017, but his massive losses were more than enough to wipe that out and keep his overall income below zero every year. In 2008, Trump reported a negative income of over $650 million, one of the largest single-year losses in the tax trove obtained by ProPublica. 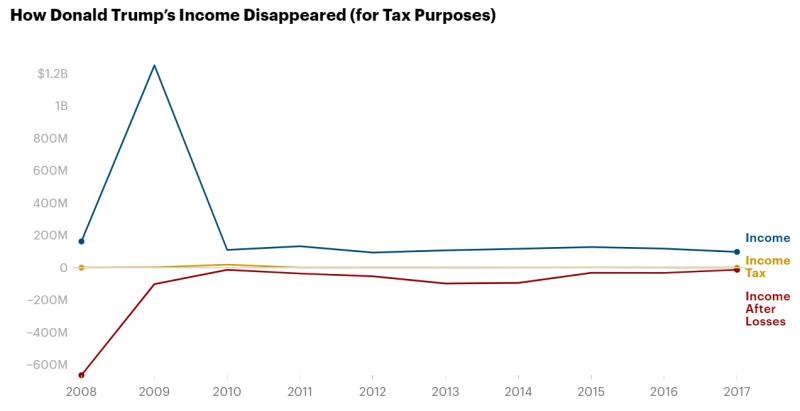 ProPublica, When You’re a Billionaire, Your Hobbies Can Slash Your Tax Bill:

Thoroughbred horses, auto racing, massive ranches, luxury hotels. The hobbies and side businesses of the ultrawealthy create huge write-offs that can let them get away with paying little or no income tax for as much as a decade at a time. ...

All Americans are entitled to life, liberty and the pursuit of happiness. But the happiness of the wealthy can come with an added bonus: It’s subsidized by taxpayers. Billionaires can not only deduct the costs of buying, owning and training thoroughbred horses, but they can treat all manner of pastimes and side pursuits as businesses, and then tap those businesses as an extra source of deductions. By contrast, if you’re a middle-class person with a passion for thoroughbreds and you attend the Kentucky Derby, neither the money you spend on your ticket to sit in the grandstand nor, say, the $20 you blow in bets would help you lower the taxes you owe on your wages.

A trove of tax data obtained by ProPublica reveals for the first time the extent to which tax breaks underwrite the enjoyment of our richest citizens. Yesterday, ProPublica examined a special class of superrich taxpayers we called the biggest losers, who amass deductions to such an extent that they can avoid income taxes for years on end. We showed that many of these tax avoiders are titans in commercial real estate or oil and gas, industries on which the tax laws bestow unusually lucrative advantages.

Today we’re focusing on a broader set of strategies the ultrawealthy use to pile up deductions. Tax records show these loss producers go beyond the classic hobbies and encompass all sorts of businesses the rich control.

Sometimes, they plow funds into pet projects that lose money so consistently that it suggests profitability isn’t the main goal. The wealthy may not start these businesses chiefly as a way to reduce taxes — many billionaires would happily race horses even without a tax payoff — but the benefits flow in just the same. In some cases, the deductions from money-losing businesses have allowed a handful of people to avoid paying taxes for years. ...

These feats are possible because the U.S. tax system has made it easy for the ultrawealthy to harvest business deductions without limit. There are rules they must navigate, the result of almost 80 years of congressional efforts to rein in what lawmakers viewed as abuses. These rules include limits on the deductibility of hobbies and provisions to discourage investments that produce tax-reducing losses year after year. But these measures have proven far more effective at preventing the merely affluent from deducting losses than they have at stopping the ultrawealthy from doing so.

“The rules are like penicillin: It’s still effective sometimes, but there are some people who are resistant,” says Brian Galle, a former tax prosecutor who teaches tax law at Georgetown. “The well-advised, wealthy individuals have figured out ways around them.”

Phyllis Taylor’s company is responsible for the longest-running oil spill in U.S. history. That’s been a disaster for the Gulf of Mexico — but a tax bonanza for Taylor. ...

According to ProPublica’s analysis of a secret trove of tax data, from 2005 to 2018, Taylor took in some $444 million in income, most of it from wages, interest, dividends and capital gains, and didn’t pay a cent in federal income tax.

That’s in significant measure because she was able to transform money her company was compelled to spend cleaning up the oil spill into a perfectly legal nine-figure tax write-off for herself. ...

Taylor is part of a set of ultrawealthy Americans who manage to avoid federal income taxes for years on end by using their businesses or leisure interests to throw off enough deductions to offset the millions or even billions of dollars they make. We’ve nicknamed the group the biggest losers. Taylor’s story shows just how lucrative it can be to be a member of that particular club. ...

It may be surprising that the costs of cleaning up an environmental disaster are tax-deductible. But such write-offs are legal, qualifying as “ordinary and necessary” business expenses. By contrast, fines and penalties are not deductible. Oil giant BP was able to deduct most of the settlement it reached with the government over the Deepwater Horizon spill because much of it went to address the environmental calamity, rather than to penalties for wrongdoing.

Such deductions are unobtainable for executives or shareholders at publicly traded corporations, where only the company gets to deduct the expenses.