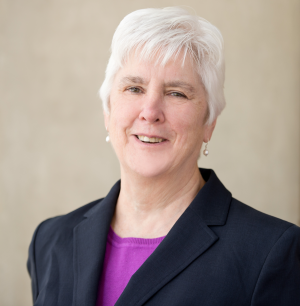 Judith Welch Wegner died on December 3, 2021 after a short illness. She is survived by Warren, her husband of nearly 50 years; a brother, a sister, sister-in-law, two nieces, three nephews and numerous friends. She was 71. She and her husband had moved to Nantucket, Massachusetts following her 2016 retirement as a faculty member at UNC School of Law.

Wegner joined the law school faculty in 1981. She served as dean from 1989-99, contributing in numerous ways to the welfare of the law school, including hiring diverse faculty and staff, implementing an externship program, reforming the curriculum, securing funds for and constructing a major law school building addition, and strengthening ties with alumni and the campus at large. She supported the development of the UNC Festival of Legal Learning (a major continuing education program) and served as director of the program for many years until her retirement. In addition, Wegner served as president of the Association of American Law Schools (1995) and as a senior scholar with the Carnegie Foundation for the Advancement of Teaching (where she was co-author of Educating Lawyers, published in 2007).

She also served the campus and UNC System, first as elected chair of the UNC Chapel Hill faculty (2003-2006) and later as chair of the Faculty Assembly representing all UNC system campuses (2008-2010).

In addition to focusing on innovative legal education, Wegner's scholarship centered on state and local government law (including a standard text, State and Local Government in a Federal System, in numerous editions). She was the recipient of the Ernest Ball award for excellence in municipal law from the North Carolina municipal lawyers. Wegner also served on numerous local elected and appointed committees and state legislative committees including the Carrboro Town Council, Orange County Planning Board, and General Statutes Commission. She took special pride in mentoring students and colleagues involved in the field of municipal law. At the time of her death, she was active as Chair of the elected Nantucket Planning Board, as a consultant on legal education for the Law School Admissions Council, and as a founding member of the Collaboratory on Legal Education and Licensing for Practice, a group of legal scholars working for more effective and equitable attorney licensing.

Wegner was born in Windsor, CT in 1950, and attended public schools there. She received her B.A. from the University of Wisconsin (Madison) in 1972 (phi beta kappa), and her law degree from UCLA in 1996 (order of the coif). Prior to joining the UNC Law faculty, she worked in Washington, D.C. as an attorney in the Department of Justice and as a Special Assistant to the United States Secretary of Education. She asks that contributions in her honor be made to the UNC School of Government Foundation.