David French (The Dispatch), A Thursday in November: God Is Faithful, In War and Peace: 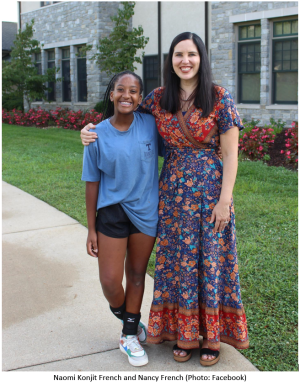 I don’t just remember where I was on Thanksgiving day in 2007. I can feel it. I can close my eyes and be there again, instantly. It was my first day in Iraq. The first real day of my deployment. ...

At around 3:00 a.m. on November 22, two CH-47 Chinook helicopters emerged out of the dark sky. The noise was unbelievable, even through my ear protection. On command, my troop stood, each of us staggered by the weight of our weapons, body armor, backpacks, and duffel bags. ...

I prayed. I asked God for some assurance—a sense of peace, maybe—that I’d come home, that I’d see my family again. I felt no peace. I felt no assurance. So I prayed for courage to not embarrass myself in front of men whose jobs were far more dangerous, who would face far more risk.

When we landed at the base, it was still dark. I must confess that I don’t have much of a poker face. I wear my emotions on my sleeve, and it must have been apparent, even through the gloom of night, that I was a bit alarmed. As I gathered my gear and prepared to move to my new quarters, one of the troop commanders—a man I’d later count as a dear friend—walked up, put his arm around me, and said, “Lawyer, if you live through this, it will be the most important year of your life.”

My friend was right. The almost-year I spent in Iraq was the most important time of my life. I gained brothers. I lost brothers. I saw things I’d never imagined and pray that I’ll never see again. I experienced stress and fear at levels I didn’t know I could take, and I served with heroes who did things that ordinary Americans can’t comprehend.

That year changed me. The man who came home was substantially different from the man who left. I was better in some ways, worse in others, and I was on the beginning of a road that so many veterans walk. How do you become the best version of your new self? How do you live with grief without letting it consume you? How do you deal with the loneliness—yes, loneliness—of separation from your brothers, the men who served beside you?

Something else happened that same day. My youngest daughter was born, and I had no idea.

At the same time that I was flying into Iraq, full of fear, a single mother in southern Ethiopia was in labor with a daughter she’d name Konjit. ... While I was spending the most important year of my life in sight of Iranian mountains, my little girl was fighting for her life. ...

As my pastor has said, every adoption begins in brokenness. Even the most idyllic stories, the ones where a young mom works with a loving family to arrange adoption beginning the moment of birth, involve a separation that most of us can’t comprehend. Little Konjit’s story involves separation after separation, profound loss and profound pain.

Under the care of loving nurses and a good doctor, hope and health returned. Konjit slowly but surely gained strength. She lived in an orphanage in Addis Ababa, waiting for a family to bring her to a new home. She didn’t have to wait long.

My wife and I decided to adopt before I left for Iraq, but for obvious reasons we waited to start the long, expensive process until after I returned. We chose Ethiopia in part because our church supported missionaries there, and we chose our adoption agency because of its sterling reputation.

Throughout the adoption process, I quite frankly struggled. I couldn’t sleep. ... I was brooding and sad — I couldn’t stop thinking about the brothers we lost.

And my faith suffered. I felt distant from God. It was my own stupid fault. I was actually arrogant enough to think that I could go off to war, come home, and restart my civilian life, unscathed. I thought I was old enough, mature enough, not to suffer the same kinds of consequences as younger soldiers. I was so wrong.

It was in the midst of this crisis of faith and family that we forged through the adoption process. Finally, in late 2009 we received our referral. It was Konjit. As I looked at her picture and scanned her medical information, my eyes fell on her birthday. November 22, 2007. My daughter was born the day I flew off to war. The day I was filled with doubt and fear.

If you talk to many adoptive families, they can tell you story after story of the providential details (or what more secular folks might call “cool coincidences”) that bond new parents to their adopted child. This is our special bond.

The very night that I was praying fervently for peace — and not receiving it — God was preparing the next phase of our family’s life, in an Ethiopian village thousands of miles away. The very night that a young mom was fearful and desperate, and a grandmother was preparing for a challenge she didn’t expect, God was shaping Konjit’s new family, putting us through an ordeal that ultimately made my marriage stronger and my biological kids more wise and mature. ...

I’m reminded of the scripture that declares “a bruised reed he will not break, a smoldering wick he will not snuff out.” In adoption, God’s mercy was made manifest, but not just for our youngest daughter. A tiny bruised reed joined a family of bruised reeds, scarred by their own experiences but ready to love a child suffering from loss that words can hardly express.

On November 22, 2007, one life changed, one life began, yet God remained the same — sovereign, loving, and directing the steps of a father and child. This Thanksgiving isn’t just a time for gratitude, it’s a time of remembrance. I remember the men who were on those helicopters and never came back. I remember the man I was. I remember my lack of faith. Then I’ll look across the table and see my daughter’s face, and I’ll remember that the Lord is good, and his mercy endures forever.

Happy (late) Thanksgiving, readers. May God richly bless you. This day and every day.