Yale Law School And The Federalist Society: Caught In A Bad Romance?

Following up on my previous coverage (links below):  David Lat, Yale Law School And the Federalist Society: Caught In A Bad Romance?: 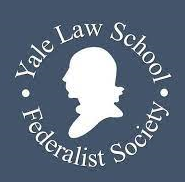 [T]here’s no love lost between YLS and FedSoc right now—and, in fact, relations are even worse than we thought.

Trent Colbert, the 2L who sent the allegedly offensive email, wasn’t the only law student summoned to meet with YLS administrators and urged to issue an apology. The current president of the Yale Federalist Society, Zachary Austin, was also pressured to apologize—even though Austin and FedSoc were not involved in sending the email, sent by Colbert to fellow members of the Native American Law Students Association (NALSA), not the Federalist Society. (The invitation that Colbert sent to FedSoc members was much more matter-of-fact and said nothing about a “trap house.”)

Zach Austin recounted the whole sordid affair yesterday at the 2021 Federalist Society National Lawyers Convention, when he delivered customary “state of the chapter” remarks at a breakfast for YLS alumni. As a Yale Law alum myself, I happened to be in attendance, and this post is based upon Austin’s remarks (which I tried my best to take down; luckily I had my laptop with me).

Austin began by providing background on how the Constitution Day party came to be co-sponsored by FedSoc and NALSA in the first place. Originally FedSoc reached out to the American Constitution Society (ACS), FedSoc’s counterpart on the left, to see if ACS would be interested in co-sponsoring a Constitution Day celebration. Alas, for the fourth year in a row, ACS declined (a bit ironic, given the organization’s name).

Instead, ACS announced an event of its own, focused on how the Constitution is a tool of “oppression” directed against Native Americans. To prepare some counterprogramming, Austin proposed a social event for Constitution Day that FedSoc would co-sponsor with NALSA. Thanks to the advocacy of Colbert, a member of both organizations, NALSA agreed.

Trent Colbert sent his fateful email on September 15. The very next day, Colbert was summoned to meet with two YLS administrators, associate dean Ellen Cosgrove, who leads Yale Law’s Office of Student Affairs (OSA), and diversity director Yaseen Eldik. Later in the day on September 16, Cosgrove and Eldik met with Zach Austin, after sending him what Cosgrove later described as a “formal summons.”

As previously noted, FedSoc had nothing to do with Colbert’s email. So why was Austin summoned to meet with YLS administrators? According to Austin, Eldik said something to him along the following lines when they met:

I think you as a cis/het white man decided to have some fun, and convinced a man of color with a backyard to send out an email announcing a costume party where it wouldn’t be frowned upon if people came in blackface to eat some fried chicken while dancing to trap music.

As a person of color, I’m amused but also annoyed at how white people always seem to be the only people with agency in situations like this, with everyone else as either their victim or puppet. It’s quite insulting to Trent Colbert to assume that he sent the “trap house” email only because he was put up to it by a white man. If I write something offensive or outrageous in these pages, rest assured that my white husband didn’t put me up to it (since, to the contrary, he usually tones me down in editing; you should see my first drafts, which would have gotten me canceled by now).

So if you’re confused as to where on earth Eldik came up with his “a white guy made him do it” theory about Trent Colbert’s email, you’re not alone. As Austin explained yesterday:

No one who has taken a statutory interpretation class—even one at Yale Law School—could possibly believe in good faith that the email said anything remotely related to [a blackface party]. As I began to explain that to Yaseen, we were joined by Dean Cosgrove and Chloe Bush. Chloe is not a diversity and harassment resource coordinator, but rather the OSA administrator responsible for approving FedSoc’s budget. Especially because she was never in any meeting with Trent, her pressure came across as fiscal pressure on our organization to comply. Despite my repeated requests, OSA has not provided an alternative explanation for her presence.

Our heaps of documents—including Trent’s relatively unknown email prepared for the FedSoc listserv—refuted any allegations that we were planning a blackface party. Dean Cosgrove, Chloe, and Yaseen appeared to acknowledge as much. Nevertheless, they tried to pressure me into sending out a public apology that they had drafted for me. I was told that if I didn’t apologize, my reputation in the law school and in the broader legal community might never recover. I refused.

An apology from FedSoc—for what, exactly? Existing? I’d love to see what exactly the draft “apology” said, given the organization’s manifest lack of involvement with the email. ...

I believe that the administration should apologize to Trent Colbert, Zach Austin, and the Yale Federalist Society, for its egregious mishandling of this incident—which, if handled properly, never would have generated copious, critical coverage in some of the nation’s leading media outlets. ...

I predict that Yaseen Eldik and Ellen Cosgrove will be removed from their current roles (as I know several faculty members and alumni have urged). I’m guessing they will have soft landings, though, and will be given new jobs somewhere within Yale University’s vast and growing bureaucracy. ...

I believe that Heather Gerken, whose tenure as dean is now under review, will be renewed for another term—which is something that I personally support.

After she is renewed as dean, which politically will give her more leeway and leverage—right now she’s walking on eggshells, trying to keep everyone happy during her deanship review period—I hope that Dean Gerken will retract her administration’s condemnation of Trent Colbert’s email and issue an overdue apology to Colbert, Zach Austin, and the Yale Federalist Society. I hope that she will reaffirm that FedSoc and its members are a valued part of the YLS community. And I hope that she, and all the other administrators and professors at Yale Law School, will stand up for free thought and free speech, in the finest traditions of Yale University.4 [UPDATE (8:46 p.m.): A reader asked me: why shouldn’t Dean Gerken act immediately? I would be pleased to see Dean Gerken take any of these actions before her deanship is renewed but don’t see that as likely, since they could anger the critics of Colbert and FedSoc. And the renewal should happen any day now, so it won’t be long anyway.] ...

Yale Law School and the Yale Federalist Society will never be lovers, or even friends. But if they can peacefully coexist in an environment of mutual toleration and respect, and if certain YLS administrators can at least put on a poker face when dealing with FedSoc, that’s something I will shower with applause.