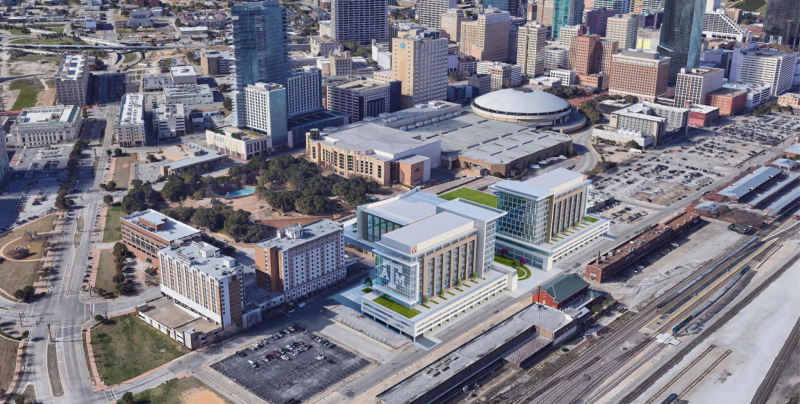 Hub for collaboration with industry would rise alongside new law school building.

Fort Worth government and business leaders and Texas A&M University System officials are working together on plans to build a new downtown research campus to spur innovation and business development. ...

“The A&M System is making a Texas-sized commitment to Fort Worth,” Chancellor John Sharp said. “Welcome to Aggieland North.” ...

A new Law School would serve as the front door and academic anchor of the urban campus.

The current law school is housed in the former Southwestern Bell call switching facility that was converted for office use. The school also uses leased space in a nearby building. The plan envisions renovating or rebuilding the law school to accommodate growth and provide a state-of-the art educational environment.

Since the A&M System acquired the law school eight years ago, it has experienced the largest jump to its reputational score of any law school in the United States. It recently passed its Texas counterparts at Baylor University and the University of Houston in the latest U.S. News & World Report rankings.

The specific cost of the project is not yet known since so many of the pieces are still in the conceptual stage, but the numbers are somewhere between $250 million to $350 million total, according to the law school spokesman.

Law dean Robert Ahdieh said in an interview Friday that he is in talks with several national law firms to locate offices on the new downtown Fort Worth campus the school is planning. He declined to name which firms have expressed interest, noting only that they aren't based in Texas but said he's confident that at least one will ultimately sign on.

“If we’re talking about teaching students to be practice ready and to understand practice management skills, and have those kinds of opportunities, a hell of a good way to do it is to have a law firm down the hall,” Ahdieh said.