Although I read a lot of my faculty's scholarship, Cost of Arrogance: A Jake Clearwater Legal Thriller by Harry Caldwell is the first faculty novel I've read. A book launch event will be held this Friday, November 12, from 2:00 - 5:00 PM PT at the Figueroa Brewing Company in Westlake Village, California: 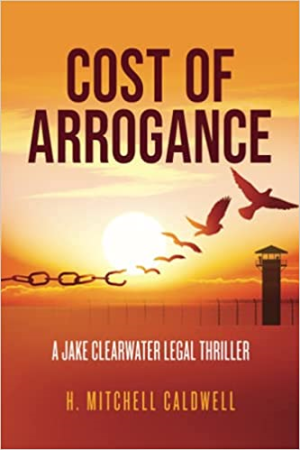 A despicable client hell-bent on being executed, a vengeful and formidable opponent, and a reluctant Supreme Court, confront Jake Clearwater as he undertakes a daunting and unforgiving challenge.

Clearwater, a law professor [at a fictional law school in Malibu, California] and former prosecutor, is urged by a group named the Death Penalty Project to help stem the tide of wrongful death penalty convictions by agreeing to represent Duane Durgeon, a hulking, hard-boiled bad ass, despite Durgeon's demand to be executed. What follows is a riveting tale of courtroom drama, suspense, and the exquisite working of law and ultimately of justice.

Paul Caron
5.0 out of 5 stars  A Great Courtroom Thriller

Cost of Arrogance is written with all the élan and verve of a John Grisham novel. Jake Clearwater is an unforgettable character who takes us inside the halls of a fictional law school in Malibu and august California courtrooms. This is a legal thriller in the best sense: a fascinating plot with surprising twists and turns that leave the reader rooting for Jake to prevail against all odds. Lawyers and law students will love this book, as will anyone who enjoys a rollicking read about the pursuit of justice in 21st century America.

Caldwell's work shines in his ability to make the intricacies of the law accessible to laypeople while still satisfying those with legal experience. — Kirkus Reviews

This book is a must-read for any fan of courtroom thrillers. There is no stone left unturned when Jake Clearwater takes on a case. — San Francisco Book Review

Caldwell's strong and charismatic protagonist Jake Clearwater is the new Perry Mason, and I can't wait to read the next entry in the series. Highly recommended! — Eric Petersen, The Internet Review of Books

"Law professor Caldwell knows where of he writes and it blazes through every page. He does so in this novel with pinpoint legal prose, a razor-sharp wit, and perceptive asides that turn humdrum courtroom battles into edge of the seat drama." —Ivor Davis, Author of Manson Exposed: A Reporter's 50- Year Journey into Madness and Murder

"A gripping novel about a former top prosecutor turned esteemed law professor who take on a case to challenge the death sentence for a vicious, confessed, and convicted murderer.The trial details are accurate and dramatic, reflecting the author's real-life experience as a prosecutor who now teaches law. I lost a night's sleep—I couldn't put it down." —John Sharer, trial lawyer, Gibson Dunn & Crutcher, member of the American Board of Trial Advocates