Large college endowments have notched their biggest investment gains in decades, thanks to portfolios boosted by huge venture-capital returns and soaring stock markets.

The University of Minnesota’s endowment gained 49.2% for the year ending June 30, while Brown University’s endowment notched a return of more than 50%, said people familiar with their returns, which aren’t yet public.

Meanwhile, Duke University over the weekend said its endowment had gained 55.9%. Washington University in St. Louis last week reported a 65% return, the school’s biggest gain ever, swelling the size of its managed endowment pool to $15.3 billion. The University of Virginia’s endowment reported a 49% gain. Universities’ returns may include portions of endowments, plus other long-term investments. 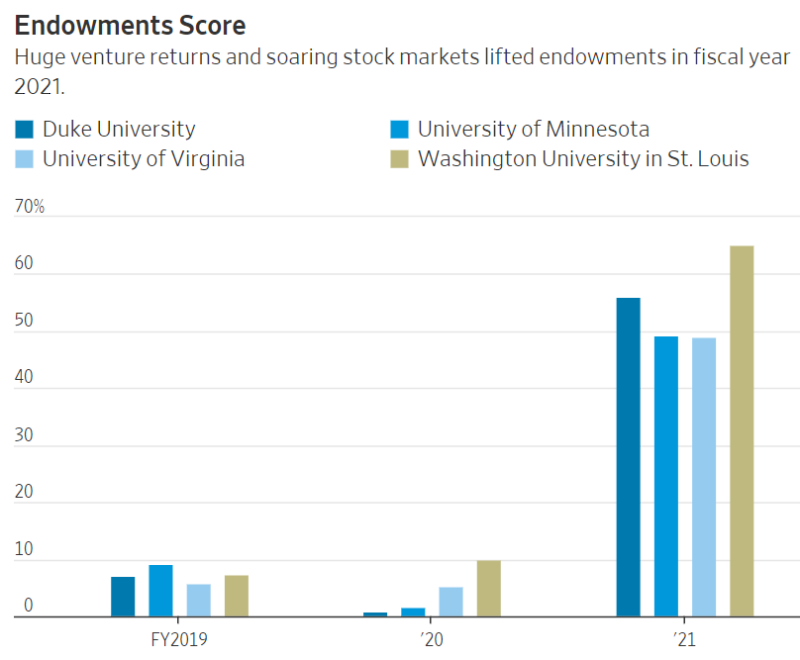 The numbers also could rekindle debate around a touchy topic: whether—and how—much wealthy universities should be taxed. Some universities have been criticized for not spending more of their money to reduce tuition and support low-income students. A tax of 1.4% on college endowments’ income was enacted in the 2017 Tax Cuts and Jobs Act signed by President Donald Trump, affecting private schools with at least 500 students and at least $500,000 of investments per student.