The associate dean and the "diversity and inclusiveness director" called the author of the e-mail in to discuss the controversy—itself perhaps an overreaction, but perhaps justifiable. But rather than framing it as "here's how we can all learn to avoid unnecessary misunderstandings," they called him with a message labeling this a "deeply concerning and problematic incident." And, to quote the liberal Northwestern professor Andrew Koppelman,

Then came this disastrous blunder: "The email's association with FedSoc was very triggering for students that already feel like FedSoc belongs to political affiliations that are oppressive to certain communities through policies. … That of course obviously includes the LGBTQIA community and black communities and immigrant communities." …

This may have truthfully reported how some students feel. But [the director] should have distanced the law school from those feelings.

When the student declined to apologize, they sent out this e-mail: 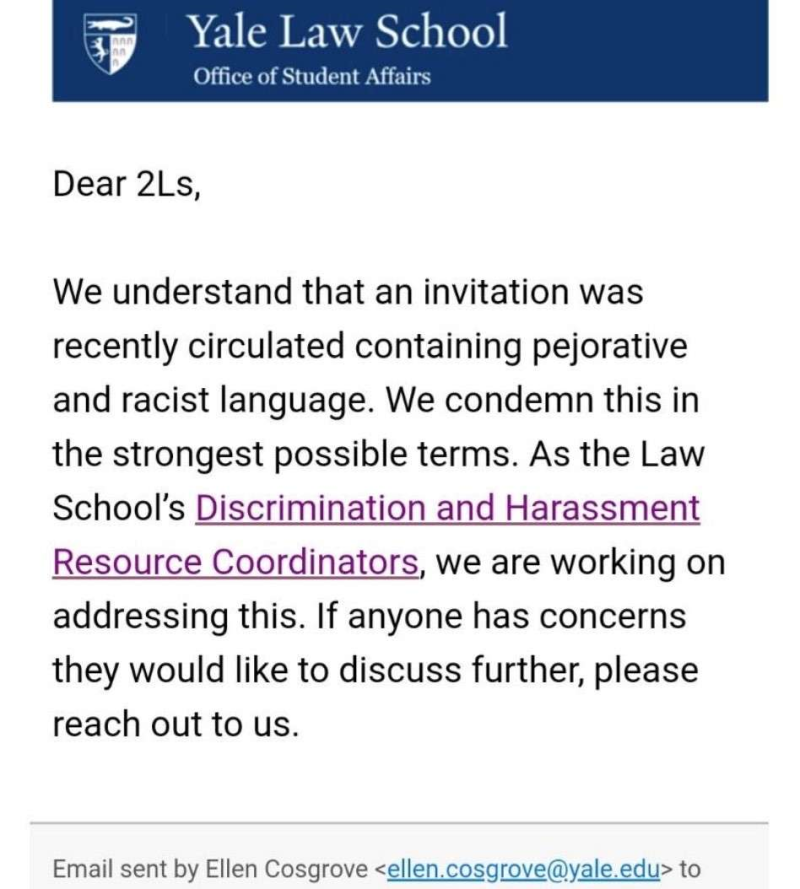 Here mediation has ceased. The law school has taken it upon itself to declare who is right and who is wrong. Colbert was publicly branded as "racist" before his peers.

And, at a follow-up meeting, the director "says, 'You're a law student, and there's a bar you have to take. So we think it's really important to give you a 360 view.' This is more menacing than anything that was said the previous day. It suggests that this episode might be brought up to the character and fitness inquiry of a bar admission." So instead of teaching, we see "bullying" and "coerci[on]" (to again quote Koppelman). ...

But as importantly, we see Yale teaching the wrong lesson to students on the other side of the controversy: The lesson that, when you see a statement that has a bad connotation to you, the right thing to do is to ignore the reality of diversity—the reality that different people honestly perceive words to have different connotations—and instead immediately label the statement as "racist" and in need of addressing as "Discrimination and Harassment."

Again, would you want a lawyer working for you who consistently reacts that way, when he's negotiating a deal with a prospective business partner of yours (or even with a litigation adversary's counsel, where often calming the waters is more important than roiling them)? Would you want a lawyer who routinely demands sanctions for the opposing side over things that many judges are likely to just see as minor miscommunications? Sometimes such a reaction might be useful—but much more often it's destructive, of professional relationships and of credibility.

Likewise, would you want a lawyer who would routinely react this way to things you as the client say, or you as a coworker say? Or would you prefer a lawyer, who if genuinely troubled by one possible interpretation of a statement, reaches out to the speaker and asks something like, "I'm not sure I quite understood what you meant by 'trap house'; can you explain a bit more? … Oh, really? That's odd; I took it as some reference to crack houses—you might not know, but that's what trap house still usually means in many contexts—and as some pejorative allusion to black crack addicts. I think some others took it the same way. Very glad that's not what you had in mind."

Which reaction is Yale Law School teaching students to offer in the future, at school, at work, in court, or elsewhere?