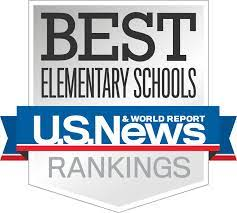 Today, for the first time, U.S. News published rankings of public elementary and middle schools [methodology here]. Like our annual Best High Schools rankings, we hope these statistical assessments are a useful resource for parents in conjunction with the accompanying data we publish on school characteristics.

All public schools were ranked for which source data and history allowed. In other words, whether a school was ranked or unranked was independent of academic quality. About 81% of public schools with elementary and middle school grades received a ranking.

Including ranked and unranked schools, U.S. News now lists 118,332 public and private grade schools in its directory; among which U.S. News ranked 79,941 unique public grade schools in 2021. These include 47,325 schools newly ranked as elementary schools and 23,255 as middle schools — some of which are in both rankings.

Unlike the high school rankings, there are no national rankings of elementary and middle schools. There are overall state rankings and state rankings broken out by school district. We also published statewide rankings specific to charter schools and magnet schools.

Reaction from college educators was what might be expected.

Siva Vaidhyanathan, the Robertson Professor of Media Studies and director of the Center for Media and Citizenship at the University of Virginia, tweeted, “Have you no shame? Seriously. What is wrong with you people?”