Scholarly impact, academic influence, or faculty reputation: call it what you will, there is a general sense that the work that law professors do outside the classroom is important part of what law schools have to offer, and what distinguishes one from another. Unfortunately, the academic ranking that seems to have captured the most attention, the Sisk rankings, is not fit for purpose. The Sisk rankings arbitrarily excludes the majority of ABA accredited law schools, including several that outperform many of those ranked by Sisk and every law school based at a Historically Black College or University (HBCU).

This exclusionary approach to ranking schools is unfair and unnecessary. It is unfair because it falsely implies that certain disfavored or overlooked schools are inferior to those deemed worth ranking. Moreover, even the exclusion of schools that don’t outrank Sisk’s preferred schools once the playing field has been leveled is also unfair. It suggests that the overlooked schools are not even in the same league as those that are ranked, rather than being separated by matters of degree.

This unfairness is unnecessary. In this Essay, I offer a much fairer and more straightforward ranking of U.S. law school faculty impact based on the median five-year citation count of doctrinal faculty in law reviews and journals in the HeinOnline database. My rankings include every U.S. law school in the HeinOnline database, i.e. every ABA accredited school. Furthermore, to demonstrate that the unfairness of the Sisk rankings do not depend on the minutia of calculation, I provide several alternative rankings based on mean, median, and total citations within the past five years, and various combinations thereof. No matter how you crunch the numbers, several schools that ignore actually outperform the ones he chooses to rank. 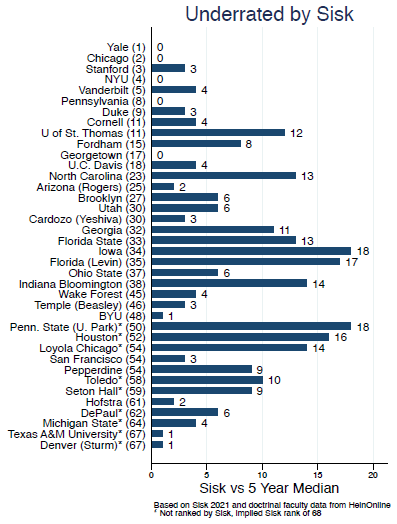 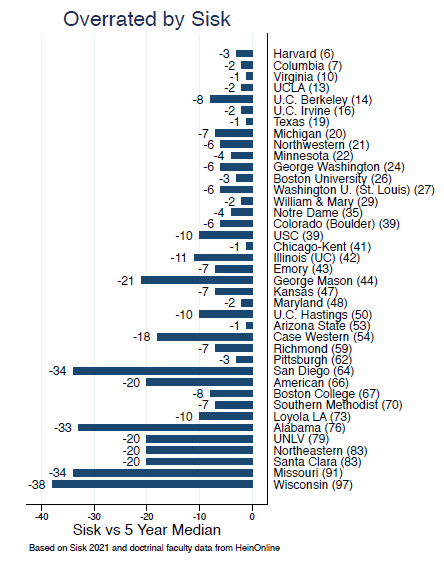 Matt also has written a blog post on his paper that has attracted a lot of commentary, as well as a more detailed 115 page version with an appendix with each school's ranking and five-year citation distribution listing the names of faculty at each school who are at or above the school's median number of citations. Here is Yale, the #1 ranked school (also #1 ranked in the Sisk-Leiter citation ranking using Westlaw): 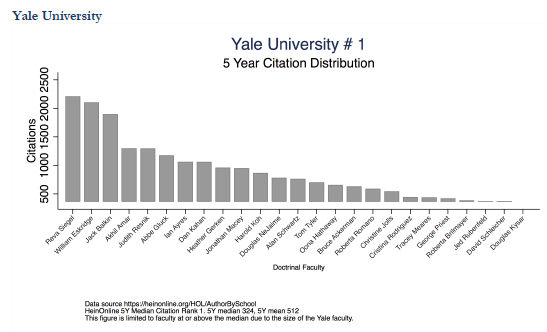