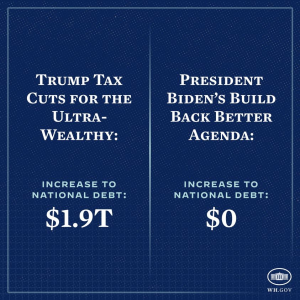 Jesus taught that “it is easier for a camel to go through the eye of a needle than for someone who is rich to enter the kingdom of God.” His words came to mind as I watched Jeff Bezos board his private spaceship in July. It seems easier today for a billionaire to launch himself into space than for Congress to increase taxes on rich people.

Too often, Christian politics gets reduced to abortion and same-sex marriage. This dynamic has always struck me as odd, since Jesus never talked about those topics. The Gospels do record him consistently speaking out about economic justice, though. Drawing attention to Christian support for raising taxes and increased spending on social programs helps reorient our public discourse to the issues Jesus actually cared about. ...

In his recent encyclical, Pope Francis wrote that, post-pandemic, "Our worst response would be to plunge even more deeply into feverish consumerism and new forms of egotistic self-preservation." He also warned against "this dogma of neoliberal faith" that "resort[s] to the magic theories of 'spillover' or 'trickle.'” Trickle-down economics — the theory that giving more money to people who are already wealthy will somehow benefit the rest of us — inspired tax cuts for rich people under former Presidents Ronald Reagan, George Bush and Donald Trump. Trickle-down economics is the opposite of Christian teaching. Jesus teaches us in Matthew 25 that nations will be judged by how they care about the most vulnerable people first and foremost.

If we can summon the political will to protect the most vulnerable people and the planet through bold investments in the common good, we can build a more just country and economy for all. The resources exist for us to make these investments. It’s now just a question of having the moral courage to make wealthy people pay their fair share.