NY Times Op-Ed: What Does A University Owe Democracy?

New York Times op-ed:  What Does a University Owe Democracy?, by David Brooks: 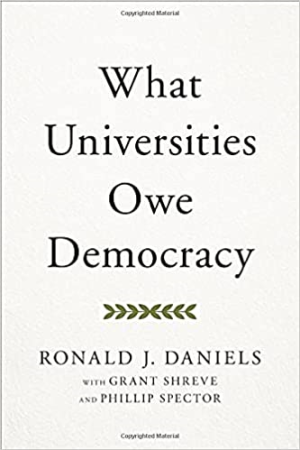 Last November, Dorian Abbot, a geophysicist at the University of Chicago, posted a series of slide presentations on YouTube making a case against the use of group identity as a primary criterion in selection processes. He was immediately targeted for cancellation.

So Robert Zimmer, Chicago’s magnificent president (now chancellor), stepped in with a clear statement of support for academic freedom. The controversy evaporated.

Then, in August, Abbot and a co-writer published an op-ed in Newsweek making the case that diversity, equity and inclusion policies violate “the ethical and legal principle of equal treatment.” It led to another cancellation campaign, this time in protest of his invitation to deliver the prestigious Carlson Lecture at the Massachusetts Institute of Technology, where he was going to speak about “Climate and the Potential for Life on Other Planets.”

This time, the campaign worked. As Abbot has detailed, a department chair called to tell him the school would be canceling the lecture “in order to avoid controversy.”

The two episodes are a stark illustration of the difference between the culture of intellectual courage nurtured by Zimmer and the Coward Culture at work at M.I.T. and other institutions ostensibly invested in the cause of free expression.

It’s also a reminder that our universities are failing at the task of educating students in the habits of a free mind. Instead, they are becoming islands of illiberal ideology and factories of moral certitude, more often at war with the values of liberal democracy than in their service.

I’ve been thinking about all this while reading “What Universities Owe Democracy” by Johns Hopkins University’s president, Ronald Daniels.  ...

This is an exceptionally important, insistently reasonable, delightfully readable book, even if his views sometimes differ from mine.

Daniels’s core point is that, at their best, universities serve as escalators for social mobility, educators for democratic citizenship, stewards of fact and expertise, and forums for “purposeful pluralism” — the expression and contest of ideas.