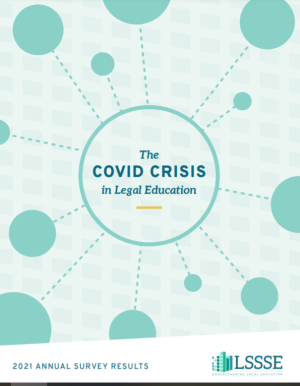 The report shows that though the core of legal education remained relatively stable and overall satisfaction remained remarkably high, law students were more likely than in years past to be lonely, emotionally exhausted, and to struggle with anxiety and depression.  Furthermore, COVID also deepened ongoing disparities and inequities in legal education.  Vulnerable student populations faced even greater challenges over the past year.

“Our students have been struggling due to COVID. The LSSSE findings show that the pandemic exacerbated existing challenges, including food insecurity, financial burdens, eviction worries, and anxiety and depression,” said Meera E. Deo, Director of LSSSE. “Armed with this data, law schools now have a responsibility to act, to support students with the time, energy, and resources they need to not only survive, but thrive in law school and beyond.”

The Foreword highlights the voices of law students taken from the open-ended student comment section of the survey.  The comments reflect the struggle and toll of the pandemic: “We are exhausted, and we need more financial assistance/resources for mental health,” said one student.  Another student reported, “It is extremely difficult to form meaningful relationships with other students when we are all remote.”