Inside Higher Ed, Author Discusses Robert’s Rules of Order and Why It Matters for Colleges and Universities Today: 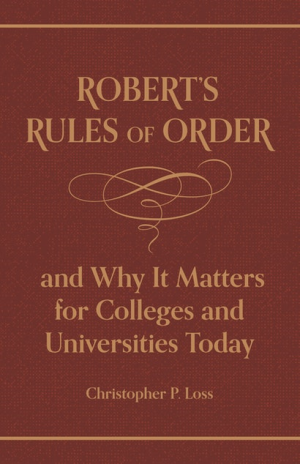 Robert’s Rules of Order was first published in 1876. And today it continues to influence many organizations that use the book, including colleges, universities and academic organizations. Princeton University Press has just published the original book along with an essay by Christopher P. Loss, associate professor of education and history at Vanderbilt University, under a new title, Robert’s Rules of Order and Why It Matters for Colleges and Universities Today (Princeton University Press Sept. 2021).

Loss responded to questions about the book via email. ...

A: American higher education in the late 19th century in many ways reflected the intellectual and social interests and sensibilities of white men like Henry Martyn Robert, West Point Class of 1857. Some would argue it still does. At the same time, the higher education sector was far more institutionally diverse than is often recognized and included liberal arts colleges and a mix of public as well as private Black-serving institutions and women’s colleges and normal schools that also used Robert’s Rules. For example, Howard University was an early adopter, and women’s organizations were and remained among Robert’s most devoted followers. American higher education, like our nation, had to work hard to realize its democratic potential in the 20th century, and it turns out that Robert’s Rules played a key, if surprising, role in that still-unfinished process. ...

Q: Many associate American campuses with uncivil debate. Could Robert’s Rules change that?

A: ... Robert’s Rules can neither heal our polarized politics nor guarantee that common decency and mutual respect will always prevail on our campuses. That will take a lot more than reading Robert’s Rules. It will require a renewed commitment to our nation’s democratic principles — and to one another — to solve all the problems that now confront us.