At Yale Law School, A Party Invitation Ignites A Firestorm

Maoist reeducation camps have nothing on Yale Law School. If you think this is an exaggeration, okay, it is, but keep reading.

Last month, a second-year law student sent some classmates an invitation to a party — to celebrate Constitution Day, of all things.

The student, Trent Colbert, who has the unusual profile of belonging to both the Native American Law Students Association (NALSA) and the conservative Federalist Society, emailed: “Sup NALSA, Hope you’re all still feeling social! This Friday at 7:30, we will be christening our very own (soon to be) world-renowned NALSA Trap House . . . by throwing a Constitution Day bash in collaboration with FedSoc. Planned attractions include Popeye’s chicken, basic-bitch-American-themed snacks (like apple pie, etc.) . . . Hope to see you all there.”

“Trap House,” according to the Urban Dictionary, was “originally used to describe a crack house in a shady neighborhood,” but “has since been abused by high school students who like to pretend they’re cool by drinking their mom’s beer together.” A popular far-left podcast, by three White men, calls itself Chapo Trap House, without incident.

Not at Yale Law School. Within minutes, as reported by Aaron Sibarium of the Washington Free Beacon, the invitation was posted on the group chat for all 2Ls, or second-year law students, of which several asserted that the invite had racist connotations, and had encouraged students to attend in blackface. ...

But what erupted on the group chat didn’t stay on the group chat. All too typically, the issue was escalated to authorities and reinforced by the administrative architecture of diversity and grievance. And that’s when things went off the rails.

Within 12 hours, Colbert was summoned to meet with associate law dean Ellen Cosgrove and diversity director Yaseen Eldik. There, he was told that his message had generated nine student complaints of discrimination and harassment, and was more or less instructed to apologize. ...

Sorry, but if you’re triggered by the Federalist Society, you don’t belong on a law school campus. ... These students may be among the best and brightest, but they also need to do some growing up. 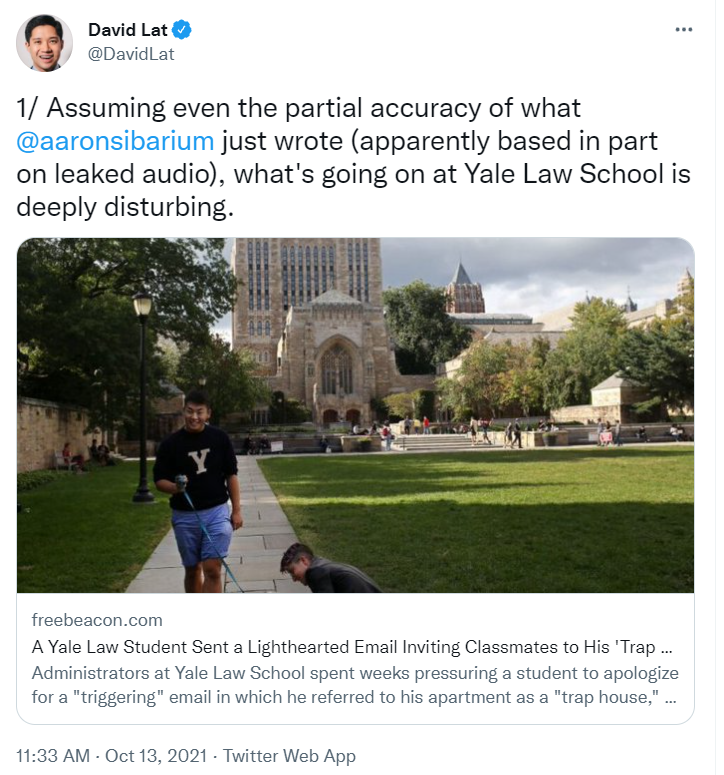 Yes, it’s true that no official investigation was initiated or disciplinary action taken—despite calls from some offended students for such steps. Yes, it’s true that Eldik and Cosgrove (eventually) told the sender that none of this would be reported to the bar.

But again, listen for yourself, to the entire recording. Pay attention to the tone, the implications, and the insinuations. Eldik and Cosgrove speak carefully, in a way that gives them plausible deniability (and makes YLS’s artfully worded statement literally true). The overall effect a listener is left with, however, is that the email sender is in trouble with the administration, his misdeeds could have career consequences for him—and if he knows what’s best for him, he’ll apologize.

The sender never did apologize—good for him, since he had nothing to apologize for. Instead, he offered to speak individually with anyone who was offended by his email—to talk things out, like the intelligent adults that Yale Law students presumably are. Alas, nobody took him up on that offer.

I have a suggestion for law school deans. In situations like this one, involving an allegedly offensive communication, law schools should have a “meet and confer” requirement, like courts do when it comes to discovery disputes. Before the administration gets involved, the complaining students should be required to try and talk things out with the offending party.

This isn’t the first time a university has put intense pressure on a student or faculty member to recant, apologize, or even beg for forgiveness the moment speech leads to controversy and heated conflict. Universities across the country continue to treat students like children who cannot resolve their own disagreements. As FIRE President and CEO Greg Lukianoff has written, teaching young people that interpersonal conflicts must be resolved by appeals to power “encourages habits of moral dependency”:

Free societies must include some element of individual responsibility and encouragement to handle conflicts on one’s own. It is hard to overstate the dangers of training a generation of people in a democratic society to always look to authority figures to resolve life’s difficulties.

A university like Yale must allow students and faculty members to express themselves freely and criticize each other’s speech without administrative interference and prepackaged apologies.