Wall Street Journal op-ed:  Why Atheists Need Faith, by Michael Guillen (Author, Believing Is Seeing: A Physicist Explains How Science Shattered His Atheism and Revealed the Necessity of Faith (Sept. 2021)): 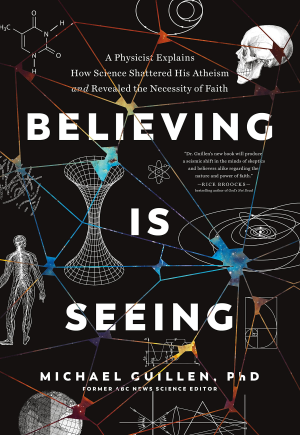 Atheism’s central conceit is that it is a worldview grounded in logic and scientific evidence. That it has nothing to do with faith, which it associates with weakness. In reality, faith is central to atheism, logic and even science.

I became an atheist early in life and long believed that my fellow nonbelievers were an enlightened bunch. I relished citing studies appearing to show that atheists have higher IQs than believers. But when I was studying for my doctorate in physics, math and astronomy, I began questioning my secular worldview.

Like one of Hermann Hesse’s tormented intellectuals, I set off to explore alternatives—beginning with Hinduism, Buddhism and Judaism. This turned into a decades-long intellectual-spiritual journey. Ultimately I became a Christian, but along the way I discovered fascinating differences and similarities among humanity’s many religions and philosophies. ...

When I was an atheist, a scientific monk sleeping three hours a day and spending the rest of my time immersed in studying the universe, my worldview rested on the core axiom that seeing is believing. When I learned that 95% of the cosmos is invisible, consisting of “dark matter” and “dark energy,” names for things we don’t understand, that core assumption became untenable. As a scientist, I had to believe in a universe I mostly could not see. My core axiom became “believing is seeing.” Because what we hold to be true dictates how we understand everything—ourselves, others and our mostly invisible universe, including its origin. Faith precedes knowledge, not the other way around. ...

The overwhelming evidence, I’ve discovered, makes it crystal clear: Faith is the foundation of the entire human experience—the basis of both science and religion. Our faith in physical reality drives us to seek treatments for deadly diseases like Covid-19, to explore the depths of the sea, to invent the perfect source of energy. Our faith in spiritual reality drives us to create breathtaking works of art, music, and architecture; to see life as a divine creation, not an accident of nature; to be curious about things that are not of this world.

For all those reasons and more, I’ve come to learn that atheists are greatly mistaken: Faith is anything but a weakness. It is the mightiest power in the universe.

Believing Is Seeing: A Physicist Explains How Science Shattered His Atheism and Revealed the Necessity of Faith (Sept. 2021)): 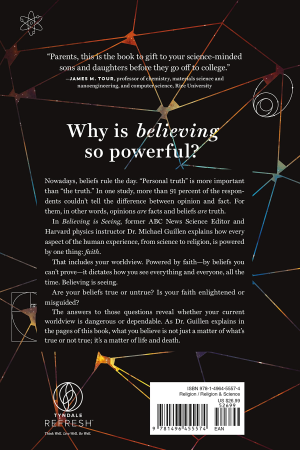 Is your worldview enlightened enough to accommodate both science and God at the same time?

Dr. Michael Guillen, a best-selling author, Emmy award–winning journalist and former physics instructor at Harvard, used to be an Atheist―until science changed his mind. Once of the opinion that people of faith are weak, small-minded folks who just don’t understand science, Dr. Guillen ultimately concluded that not only does science itself depend on faith, but faith is actually the mightiest power in the universe.

In Believing Is Seeing, Dr. Guillen recounts the fascinating story of his journey from Atheism to Christianity, citing the latest discoveries in neuroscience, physics, astronomy, and mathematics to pull back the curtain on the mystery of faith as no one ever has.

Is it true that “seeing is believing?” Or is it possible that reality can be perceived most clearly with the eyes of faith―and that truth is bigger than proof? Let Dr. Guillen be your guide as he brilliantly argues for a large and enlightened worldview consistent with both God and modern science.

Dr. Michael Guillen Sees Science in the Words of Jesus:

Dr. Michael Guillen – physicist, astronomer and mathematician – lays to waste the old debate about whether science and religion get along. Not only are they compatible, but it is because of science that he became a Christian. In fact, it was the paradoxical words of Jesus, “Love your enemies,” “The meek shall inherit the world,” “The first shall be last,” that he saw the scientific concept of a Quantum Vacuum come to life.

Guillen is the former science correspondent for ABC News and was a professor of physics at Harvard for eight years. Bottom line, he’s no slouch when it comes to understanding science. He lives and breathes it daily. He was once an atheist but began exploring the various forms of spirituality. He tried Transcendental Meditation, Buddhism, Hinduism, Islam, Judaism, and then finally found Christianity. On this episode of Lighthouse Faith podcast, Guillen talks about his new book, “Believing Is Seeing: A Physicist Explains How Science Shattered His Atheism and Revealed the Necessity of Faith.” It is science that helped him find his faith, and it is his faith that lets him see science as God’s creation.