What’s Wrong With Sex Between Professors And Students?

New York Times op-ed:  What’s Wrong With Sex Between Professors and Students? It’s Not What You Think., by Amia Srinivasan (Oxford; Author, The Right To Sex: Feminism in the Twenty-First Century (2021)): 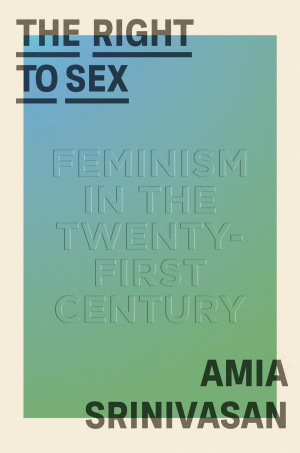 Netflix’s new hit comedy “The Chair” revels in certain clichés of university life — mock-Gothic buildings, wood paneling, crusty old-timers who don’t know how to use a photocopier, and, of course, an ambiguous relationship between a professor and a student: Bill is a charismatic English professor who is in a tailspin after the death of his wife, and Dafna is a literature-loving undergrad who is desperate to get into Bill’s class. She gives him a ride; they quote T.S. Eliot to each other; he signs a copy of his book for her; she makes him a pie. We think we know where this is going, because we’ve seen it so many times before: in “Election” (1999), “The Squid and the Whale” (2005) and “Elegy” (2008), based on Philip Roth’s novel “The Dying Animal” — to take just a few recent examples. “The Chair” ultimately upends our expectations in a way that is both comic and poignant. Don’t have sex with me, Dafna in effect says to Bill: Teach me.

The cultural fascination with professor-student affairs seems to have grown in step with policies restricting them. (“Be careful,” the dean warns Bill in “The Chair.” “This department is hanging on by a thread.”) Policies prohibiting professor-student sex — “consensual relationship policies” as they are usually known — are now common in the United States. A 2014 study found that 84 percent of the American universities surveyed had some prohibitions on professor-student relationships. ...

Despite the bans’ origins in feminist activism, some feminists at the time denounced these prohibitions as a betrayal of their principles. To deny that women students could consent to sex with their professors, they argued, was infantilizing and moralizing. Were women university students not adults? Were they not entitled to have sex with whom they pleased? Did such policies not play into the hands of the religious right, which was all too keen to control women’s sex lives? ...

In many ways, the contemporary focus on consent is a victory. Historically, sexual assault was defined not by the absence of consent but by the presence of force, which meant that the countless women who froze with fear or chose to submit rather than face the alternative were not, legally speaking, raped. But in recent years our interest in consent has become single-minded. The habit of viewing all kinds of exploitative, creepy or troubling sex solely through the lens of consent has left us unable to speak, in many situations, about what is really going wrong.

The problem, I think, with many teacher-student relationships is not that they don’t involve consent — or even real romantic love. Sometimes, no doubt, students agree to have sex with their professors, as Ms. Vinson said she did with her boss, because they are afraid of what will happen if they don’t. But there are also many students who consent to sex with their professors out of genuine desire. As defenders of teacher-student relationships like to remind us, many professors are married to former students (as if we were in a Shakespearean comedy, in which all that ends in marriage ends well). The question, I want to suggest, isn’t whether genuine consent or real romantic love is possible between teachers and students. Rather, it is whether, when professors sleep with or date their students, real teaching is possible.

Teachers, as teachers, understand how to do certain things; students, as students, want to understand how to do those things. The tacit promise of the classroom is that the teacher will work to confer on the student some of his knowledge and understanding. In the best case, the teacher-student relationship arouses in the student a strong desire, a sense of thrilled if inchoate infatuation. That desire is the lifeblood of the classroom, and it is the teacher’s duty to nurture and direct it toward its proper object: learning. The teacher who allows his student’s desire to settle on him as an object, or the teacher who actively makes himself the object of her desire, has failed in his role as a teacher.

Chronicle of Higher Education, On (Not) Sleeping With Your Students:

The 36-year-old Oxford moral philosopher Amia Srinivasan has, as the author of a series of eloquent essays for the London Review of Books about sex, feminism, culture, and ethics, been a fixture in the world of ideas for the last several years.

The book’s penultimate chapter, “On Not Sleeping With Your Students,” was adapted recently in The New York Times. Srinivasan has a knack for engaging old debates in a fresh way, in this case the argument over what, in my recent conversation with her, she referred to as “the specter of the faculty-student relationship” — a specter so ubiquitous and so familiar that it might seem hard to find anything new to say about it. Her strategy is to lower the temperature: Rather than asking, for instance, whether consent across power differentials is possible (she says that it is), she asks: Is sex with one’s students compatible with the goals of pedagogy?

Her way into this problem is Jane Gallop’s 1997 book, Feminist Accused of Sexual Harassment, in which Gallop describes her own run-ins with faculty-student sex proscriptions. “In her formal response to her students’ sexual-harassment complaints,” Srinivasan writes, “Gallop appealed to Freud’s notion of transference, the patient’s tendency to unconsciously project feelings … onto the analyst. Transference, Gallop says, ‘is also an inevitable part of any relationship we have to a teacher who really makes a difference.’ Falling in love with our teachers, in other words, is a sign that pedagogy has gone well.”

But Srinivasan turns Gallop’s invocation of Freudian transference against Gallop. “Gallop overlooks Freud’s insistence that analysts are ‘absolutely debarred’ from engaging romantically or sexually with their analysands … Instead, Freud says, the analyst must use the transference-relation as a tool in the therapeutic process.” Teaching, by analogy, should similarly debar romantic or sexual involvement — not because consent is impossible, and not because the love isn’t real (on the Freudian model, all love, not just the love between patient and therapist, involves transference dynamics), but simply because sex is incompatible with the primary goal of the pedagogical relation — teaching.

That position, Srinivasan told me, has attracted skepticism from both her left and her right.

“I got a range of responses, most of them sympathetic,” she said. “But of those who took issue with what I had written, at least one person said, ‘Look, your insistence that in some cases, if not in many cases, faculty-student relationships are consensual is a form of rape apologism.’ The more common critical response I’ve had — only from men — is a kind of libertarian one: ‘It’s prudish, and an incursion into basic civil liberties, to suggest that consenting adults can’t have sex.’”

I talked with Srinivasan about the similarities between therapy and teaching, whether students are newly infantilized, the ethics of shame and punishment, and what it means to do public philosophy.