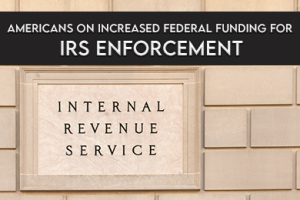 More than two-thirds of American voters favor increasing the IRS Budget by $8 billion a year to fund increased tax enforcement, a proposal being considered to help fund the reconciliation budget plan.

In the innovative survey of 2,613 registered voters by the Program for Public Consultation (PPC) at the School of Public Policy at the University of Maryland, respondents were given briefings on the proposal, and evaluated arguments for and against. The content was reviewed in advance by experts for accuracy and balance and to ensure the best arguments were being presented on both sides.

The proposal presented, based on one in the American Families Plan, calls for an increase in the IRS budget by $8 billion a year to:

In conclusion, a majority of 68% favor the plan including 88% of Democrats, 65% of independents, and 46% of Republicans.

As part of the initial briefing, respondents were told that the government estimates that it does not collect about 15% of the taxes that it is owed and that the Treasury Department has estimated that the proposed increase in the IRS budget would raise an extra $70 billion a year in revenue.

Respondents evaluated a pro and con argument before making their final recommendation. The pro argument proclaimed that the rich have been getting away with paying less than their fair share, in part by lobbying Congress to reduce the IRS’ budget and restrict their tax enforcement capabilities. This was found convincing by a bipartisan majority of 77%, including nine-in-ten Democrats and over six-in-ten Republicans.

The argument against made the case that the IRS may be overestimating the amount of uncollected taxes, that uncollected taxes are more likely the result of innocent mistakes given how complicated our tax code is, and that rather than giving the IRS more resources to harass people our tax system should be simplified. A modest majority (53%) found this convincing, including 72% of Republicans, but just a third of Democrats.

“As Congressional negotiators search for ways to pay for the reconciliation budget plan, they are likely to get a positive response from a majority of voters, and nearly half of Republicans, if they increase the IRS budget to support enforcement, especially with high-income earners,” commented PPC Director Steven Kull.

Further analysis was conducted by dividing the sample six ways, depending on Cook’s Political Report PVI ratings of the partisan orientation of the respondent’s Congressional district. A majority in very Republican (64%) as well as very Democratic (79%) districts favor the proposal.

While overall less than half (46%) of Republicans are in favor of increased IRS funding, Republican support is higher among Republican 18-34 year-olds (57%) and non-whites (57%).

The survey was conducted online from July 29 – August 23, 2021 with a probability-based sample of 2,613 registered voters and had a margin of error of +/- 1.9%. The sample was provided by Nielsen Scarborough from its larger sample of respondents, who were recruited by mail and telephone using a random sample of households.