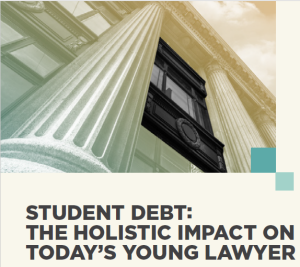 Executive Summary
In Spring 2020, the ABA Young Lawyers Division (YLD) and ABA Media Relations launched a survey to understand the impact of student loan debt on the personal and professional lives of relatively new lawyers—ABA members who had been licensed or graduated law school in the last 10 years. The results were illuminating—roughly half of the respondents indicated postponing or foregoing investing in their local community through purchasing a home and starting a family due their debt, over half reported having accumulated more than $150,000 in debt upon graduating law school, and 40 percent reported their student loan debt balance had actually increased since graduation, despite payments. The report revealed several other key insights, but also raised additional questions about the impact of student loan debt on the overall financial and emotional well-being of young lawyers.

To pursue these additional questions, we collaborated with AccessLex Institute to conduct another ABA YLD member survey in May 2021, targeting members under age 36 who earned a law degree or who were licensed in the last 10 years. Over 1,300 members representing attorneys and law school graduates in big law, solo practice, government, industry, non-profit settings, and JD-advantage positions, among others, completed the 44-item questionnaire. In addition to seeking information about the impact of student loan debt on their ability to reach traditional life milestones that previous generations regularly attained, we also posed questions meant to assess how student loan debt influences career decisions, overall financial stability, and emotional well-being. Additionally, we examined young lawyers’ experiences and satisfaction with seeking financial advice and support, as well as their pre-law awareness of the cost and potential value of J.D. attainment.

In contrast to the 2020 survey, this year’s survey was administered against the backdrop of the COVID-19 pandemic, subsequent and ongoing efforts to rebound from its negative impacts, and related events such as the temporary suspension of student loan payments, distance learning and remote bar examinations, as well as the reopening of businesses and other operations. Although the survey does not directly address or measure the impact of these events, it is likely they influenced the mindset of those responding to the questionnaire. Our analysis of the results showed that:

These results demonstrate the need for greater understanding and improvement upon the career, financial, and well-being outcomes of law students and graduates who seek loans to finance their legal education. The complete report expands upon these highlighted findings and shares recommendations for how policymakers and legal education stakeholders can work to advance law school affordability and financial education among prospective and current law students.