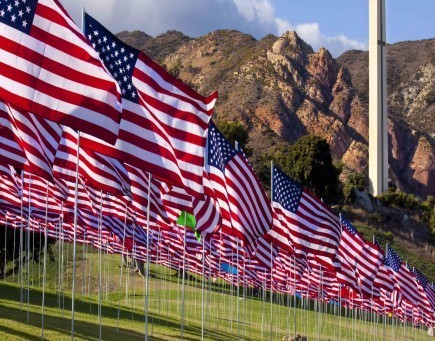 Today is a very special day at Pepperdine. For the 14th consecutive year, we displayed 2,887 American flags for each American life lost in the 9/11 terrorist attacks and 90 international flags representing the home countries of those from abroad who also were killed.

Pepperdine University to Commemorate 20th Anniversary of 9/11 with Annual Waves of Flags Display and Remembrance Events:

For the 14th consecutive year, Pepperdine University will commemorate the lives lost in the terror attacks on September 11, 2001, with the Waves of Flags display at Alumni Park on the Malibu campus. Nearly 3,000 flags will fly along Pacific Coast Highway and Malibu Canyon Road—one for each innocent victim, including a national flag for each foreign country that lost a citizen in the attack. The flags will be on display for public viewing from Thursday, September 9, to Saturday, September 25, 2021.

On the occasion of the 20th anniversary of the tragic day, Pepperdine will commemorate those who lost their lives and their loved ones with Honoring the Heroes of 9/11, a day of activities held on the Malibu campus that invites all members of the community to connect and reflect on the day together.

“On September 11, 2001, our nation and the world were forever changed. Twenty years later, we continue to honor the nearly 3,000 people who lost their lives and the first responders who sacrificed everything for their country and fellow man,” said Pepperdine University president Jim Gash. “The hearts of Pepperdine University’s students, faculty, and staff collectively break for that tragic loss we still feel today. May those who lost their lives and those left grieving be honored by our commemoration and know that Pepperdine stands with them.”

Honoring the Heroes of 9/11 will feature a silent tribute and remembrance event highlighted by a wreath-laying ceremony to honor each of the fallen victims at 5:30 AM at Heroes Garden on Pepperdine’s Drescher Graduate Campus in Malibu. 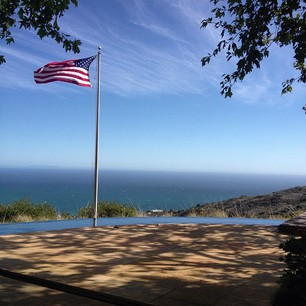 A prayer service led by University chaplain Sara Barton will follow at 9 AM at the Amphitheatre on the Malibu campus. At 9:30 AM, guests are invited to attend a screening of the film United 93, which features the heroism of Pepperdine alumnus Thomas E. Burnett, Jr. (MBA ’95), at Elkins Auditorium. Closing the day’s events is the Honoring the Heroes of 9/11 Ceremony, which will feature remarks by actor and humanitarian Gary Sinise, who has been an advocate for America’s service members since the early 1980s and whose namesake foundation was established with a mission to serve our country by honoring our defenders, veterans, first responders, their families, and those in need. Throughout the day, all 2,977 victims’ names will be memorialized on scrolling displays on campus, and visitors are encouraged to view and reflect among the sea of flags at the Waves of Flags display. All events are free and open to the public. Attendees are asked to register to attend each of the day’s events.

Started by students in 2008, Waves of Flags has become a Pepperdine tradition, one that attracts attention and admiration from across the country. It has come to transcend the commemoration of a single tragic day. The display educates both students and people far beyond the campus about the history of the United States and the sacrifices that heroic men and women have made to keep it safe, prosperous, and free.

This year Pepperdine launched the Waves of Flags Endowment Fund that will ensure permanent support for the Waves of Flags tradition and establish a legacy that will last in perpetuity. The resources the fund generates will support both the display and a ceremony on the Malibu campus each year that will ensure that the men and women from all walks of life who perished on 9/11 will be remembered on the Pepperdine campus for years to come.