A well-functioning tax system requires that everyone pays the taxes they owe. Today, the “tax gap”—the difference between taxes that are owed and collected—totals around $600 billion annually and will mean approximately $7 trillion of lost tax revenue over the next decade. The sheer magnitude of lost revenue is striking: it is equal to 3 percent of GDP, or all the income taxes paid by the lowest earning 90 percent of taxpayers.

The tax gap can be a major source of inequity. Today’s tax code contains two sets of rules: one for regular wage and salary workers who report virtually all the income they earn; and another for wealthy taxpayers, who are often able to avoid a large share of the taxes they owe. As Table 1 demonstrates, estimates from academic researchers suggest that more than $160 billion lost annually is from taxes that top 1 percent choose not to pay. 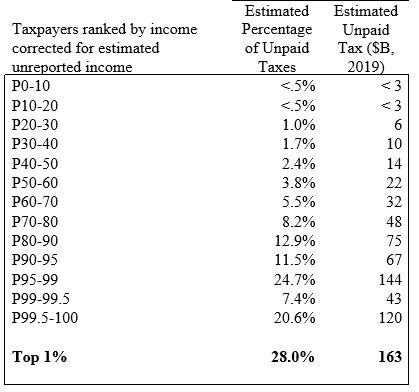 The United States collects less tax revenue as a percentage of GDP than at most points in recent history, in part because owed but uncollected taxes are so significant. The tax gap also has meaningful implications for fiscal policy. These unpaid taxes mean policymakers must choose between rising deficits, lower spending on important priorities, or further tax increase to compensate for lost revenue—which will only be borne by compliant taxpayers.

Currently, an under-staffed IRS, with outdated technology, is unable to collect 15 percent of taxes that are owed, and a lack of resources means that audit rates have fallen across the board, but they’ve decreased more in the last decade for high earners than for Earned Income Tax Credit (EITC) recipients. For the IRS to appropriately enforce the tax laws against high earners and large corporations, it needs funding to hire and train revenue agents who can decipher their thousands of pages of sophisticated tax filings. It also needs access to information about opaque income streams—like proprietorship and partnership income—that accrue disproportionately to high-earners. ...

Overall, the Administration’s compliance initiatives are guided by a singular objective—bringing about an end to a two-tiered tax system, where ordinary Americans comply with their tax obligations, but many high-end taxpayers do not. Giving the IRS the information and resources that it needs will generate substantial revenue. But even more importantly, these reforms will create a more equitable, efficient tax system.