Rosh Hashanah, Yom Kippur, And The Path To American Unity

Wall Street Journal op-ed:  Jewish Tradition and National Unity: The High Holidays Offer Lessons That Can Be Helpful to All Americans, by Joe Lieberman (former U.S. Senator and author, The Centrist Solution: How We Made Government Work and Can Make It Work Again (2021)): 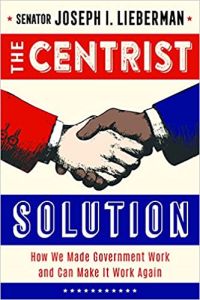 The ram’s horn, or shofar, is sounded throughout the Jewish high holidays of Rosh Hashanah and Yom Kippur as a call for Jews to reflect, reform and repent. Many of us are doing exactly that this month. The lessons associated with these holidays, which both happen in September this year, are more relevant than ever to all Americans.

The U.S. today is less unified and secure, less law-abiding, less respectful of government, and less confident in the future than at any point in my life. It needs to be jolted from its current course by the sound of the ram’s horn to find a better way forward.

The path Jewish tradition offers is through repentance, but not only in the way it is commonly understood. As Rabbi Lord Jonathan Sacks taught, the root of the Hebrew word for repentance, teshuvah, means to return. For a nation, he explained, it means to return “to our roots, our faith, our history.” This is the best first step the American people can take to overcome division, because it will show how far we have strayed from the source of our national values, unity and purpose.

As the Declaration of Independence says: “We hold these truths to be self-evident, that all men are created equal, that they are endowed by their Creator with unalienable rights, that among these are life, liberty, and the pursuit of happiness.” These words—some of the most important ever written in the English language—are about more than the Founders’ call for independence from England. They are an American covenant entered into by succeeding generations. Too many Americans today have been distracted from the faith and values in the Declaration, causing the nation to suffer greatly.

Alexis de Tocqueville concluded after his tour of America in the 19th century that “liberty cannot be established without morality, nor morality without faith.” The American ideal that all of us are created equal has been the source of our national unity. But in our time, that faith has been overwhelmed by forces that divide our government, politics, and people.

If we all are created equally, we are all children of the same God, all members of the same national family. If we could once again see our fellow Americans that way, it would be harder to treat each other as enemies because we disagree on political issues or belong to different demographic groups. Those differences would yield to the unifying bond and great values we share as fellow citizens of the U.S. In that event, civility might return to society. Reasonable discussions full of negotiation, compromise and problem-solving could follow. ...

America still has the dynamism and courage to revive national unity. And that unity can best be achieved again by returning to our shared faith, as President Kennedy once said, that “the rights of man come not from the generosity of the state, but from the hand of God.” That is why I pray that the American people hear the sound of the shofar and are moved to return to our past values so that we can secure a better future for this country.