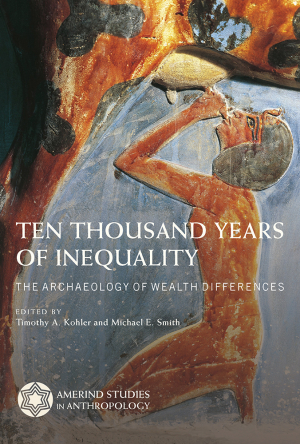 Archeologists are actively working to quantitatively measure income and wealth inequality in ancient history based on available data, some of them being quite sophisticated. Timothy A. Kohler and Michael E. Smith’s Ten Thousand Years of Inequality: The Archaeology of Wealth Differences presents existing measurement efforts and insightful discussions of the challenges faced, on all continents except Oceania. These first exercises should help us over time understand better the evolution of inequality in ancient history and its determinants. Understanding better the effects of differences in institutions in the
ancient past should be a crucial next step.

Inequality has become a major theme in economics in recent years, in part with the publication of Thomas Piketty’s Capital in the Twenty-First Century, which came out in 2014 in its English translation. An important contribution to that debate was given by Walter Scheidel’s (2017) book on violence and the history of inequality. Apart from Scheidel’s thesis that throughout history, inequality was only reduced by wars, diseases, revolutions, and state collapse, economist readers like myself were surprised to find that archeologists had figured out ways to measure economic inequality in the very distant past. Thus, for example, one source of measurement of inequality is based on differences in material wealth found in graves and burial sites. Scheidel mentions discoveries from Sungir burial sites in the Pleistocene era from thirty thousand years ago in a society of hunters and foragers. One adult man was buried with three thousand beads made from ivory and other pendants and ivory rings. Some children had ten thousand ivory beads and many prestige items such as spears made of mammoth tusk and various art objects (p. 31). The distribution of grave goods on burial sites has been used to calculate Gini coefficients. What can we learn from archeology about inequality in ancient
times, its causes, and consequences?

The volume Ten Thousand Years of Inequality (Kohler and Smith 2018), published by the University of Arizona Press, contains 11 chapters on the subject of wealth inequality in ancient times. The first two chapters deal mainly with conceptual and methodological issues, the next nine deal with case studies, and the last chapter offers a summary of lessons learned together with summary statistics from other studies.