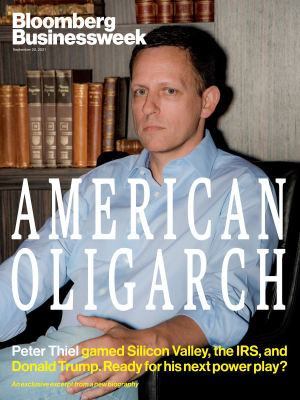 In an exclusive excerpt from The Contrarian, a new biography, the disruption-preaching power broker is revealed as just another rich guy desperate to keep his fortune from the IRS.

Trump’s presidency would not end badly for Thiel, who didn’t comment for this article, adapted from my forthcoming book, The Contrarian. Thiel’s companies would win government contracts, and his net worth would soar—and it would, crucially, remain in the legal tax shelter that he’s spent half his career trying to protect. As a venture capitalist, Thiel had made it his business to find up-and-comers, invest in their success, and then sell his stock when it was financially advantageous to do so. Now he was doing the same with a U.S. president.

Thiel is sometimes portrayed as the tech industry’s token conservative, a view that wildly understates his power. More than any other living Silicon Valley investor or entrepreneur—more so even than Bezos, or Page, or Facebook co-founder and Thiel protégé Mark Zuckerberg—he has been responsible for creating the ideology that has come to define Silicon Valley today: that technological progress should be pursued relentlessly, with little if any regard for potential costs or dangers to society. Thiel isn’t the richest tech mogul, but he has been, in many ways, the most influential. ...

By the fall of 2020, published estimates were putting Thiel’s personal net worth at around $5 billion, roughly double what it had been before Trump was elected. This was a reflection of his stake in Palantir, which had gone public in August at a valuation of around $20 billion. Thiel then owned about 20% of the company and also held stakes in a number of others whose fortunes had soared. Besides Anduril, there was SpaceX, which was now worth as much as $100 billion thanks in part to a booming business with the federal government, and Airbnb, which had recently gone public. By any financial measure, it had been a good four years.

But those who know Thiel say that even these estimates were probably way too conservative and that his true net worth was closer to $10 billion, possibly much more. That was partly because he had quietly accumulated stakes in a handful of private companies with exceedingly high valuations, including the online payments startup Stripe; a person close to Thiel figures his share is worth at least $1.5 billion. But it was also because Thiel was shielding a large percentage of his investment assets from taxes of any kind.

The strategy was legal, even if it was, from the standpoint of any normal sense of fairness, outrageous.

Thiel had parked much of his wealth inside an investment vehicle known as a Roth IRA. Roths are tax-free retirement accounts that were designed for middle-class and lower-middle-class workers, not billionaires—contributions are capped at just $6,000 per year. (You can also convert a traditional IRA into a Roth if you pay taxes on the old account.) It’s illegal to use a Roth account to buy stock in a company you control. And yet, starting in 1999, Thiel used a Roth to buy stock in companies with which he was closely associated—including PayPal and Palantir—for prices that were as low as a thousandth of a penny per share. All the capital gains since then have been tax-free.

The maneuver hinged on an extremely narrow interpretation of what it means to control a company. Thiel didn’t own more than 50% of PayPal at the time of the Roth investment and thus, legally speaking, didn’t control PayPal. But in practice, Thiel had the final say on everything the company did during much of its early history. At one point, in 2001, he threatened to resign as CEO unless the nominally independent board of directors issued him millions of shares. The board agreed because, according to three people familiar with the negotiations, it had no choice; Thiel’s resignation would have killed the company. “It was pay me or I’m going to shoot myself,” recalls one of the people. The board issued almost 4.5 million shares for Thiel to purchase, lending him the money for the transaction. Roughly a third of those shares were bought by Thiel’s Roth IRA. Within a year the new block of shares would be worth $21 million. Thiel would also use the Roth to buy shares in Palantir, whose board was packed with close friends and allies. By the end of 2019, Thiel’s Roth alone was worth $5 billion according to ProPublica, which received leaked copies of Thiel’s tax returns. Four people familiar with Thiel’s finances confirmed the report. Given the performance of the market since then, it’s likely the portfolio is much larger today.

The size of the nest egg, and the aggressive tax strategy Thiel had employed to protect it, put him in a precarious position. According to IRS rules, if a Roth IRA account holder engages in a prohibited transaction—like using the money to invest in a company you legally control—then that person loses the tax break for the entirety of the portfolio’s value. In Thiel’s case that would mean he could be on the hook for a tax bill in the billions. Moreover, in 2014, the Government Accountability Office announced that it had identified 314 taxpayers with IRA balances of more than $25 million, specifically mentioning “founders of companies who use IRAs to invest in nonpublicly traded shares of their newly formed companies”—that is, people who’d done exactly what Thiel did at PayPal and Palantir. The report noted that the IRS planned to investigate these holdings and recommended that Congress pass laws to crack down on the practice. Separately, U.S. tax authorities began an audit of Thiel’s retirement savings.

Thiel was never sanctioned—the audit never turned up anything illegal, according to a person who discussed it with Thiel—but it seemed to make him paranoid. All it would take would be a change in the way the IRS interpreted the rules to force him to pay taxes on the entire Roth account. Or a disgruntled former partner or employee might draw attention to the extent to which Thiel exercised influence over his companies in a way that made it sound like control. “If he violates a single rule, puts a toe in the wrong direction, the government can tax the whole thing,” says another person familiar with the arrangement.

This was scary to Thiel, according to several longtime employees. They say his vulnerability to a change in tax policy or a shift in IRS enforcement seemed to dominate how he related to people around him. Anxiety about a potential crackdown seemed to be part of his motivation to acquire New Zealand citizenship in 2011 and to support Trump in 2016, according to these sources. Now, in 2020, Trump’s reelection prospects were dimming. That left Thiel walking a fine line, staying far enough away from Trump so as not to be blamed if he lost but still close enough to influence Trump’s followers. He never endorsed Trump in 2020, but he was also careful not to criticize the candidate publicly. ...

Thiel is said to be in the market for other candidates ahead of the midterms and the 2024 election. “He has not reverted back to Republicanism,” Bannon says. “He’s full MAGA.” It’s not clear that Trump’s old slogan has much political salience anymore, but if Silicon Valley’s most influential venture capitalist succeeds in appropriating Trumpism, that would, at the very least, keep America great for Peter Thiel.