Wall Street Journal, Lawyers Want to Bill More Of Their Hours From the Sofa: 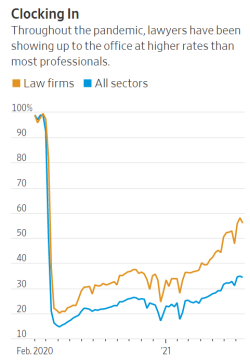 Between 100-hour workweeks and all-nighters at the office, young lawyers climbing the partner track have long been expected to put in copious amounts of face time.

But the Covid-19 pandemic is changing that, in ways that may be permanent, many in the industry say.

The legal sector has been among the fastest to race back to the office this year. Amid a rise in vaccinations, occupancy rates for law firms are back up to 56%, compared with 34% of sectors nationwide, according to data from Kastle Systems.

Yet the industry is facing an unlikely revolt. Many associates have grown accustomed to working from home. They say they’ve been just as productive, if not more so, claimed back time for themselves and their families, and want to choose how they work.

The firm is evaluating its return-to-office plans, and expects to make a decision soon, says BakerHostetler chair Paul Schmidt. When lawyers aren’t in the office, the challenge isn’t determining who’s being productive, he adds: “We know exactly how they’re working because they record their time in six-minute increments.” The problem, he says, is picking up on more subtle cues, and identifying when an associate is struggling and needs help. ... 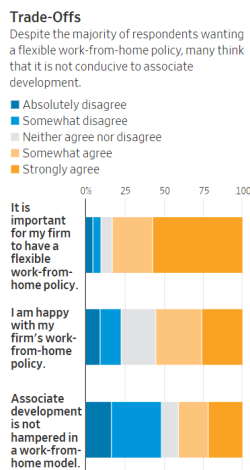 Interviews with partners at over a dozen law firms showed that a new norm is emerging, one that embraces a hybrid model. The alternative, these partners say, is to see their lawyers get poached by firms that offer more flexible work policies, including companies in fields like tech. A war for top-tier legal talent has broken out this year, pushing salaries for entry-level associates past $200,000 at elite firms. Those who want to hold on to their people say they have to accommodate a new generation’s expectations—even an aversion to the idea of returning to a pre-pandemic work lifestyle.

Yet many lawyers say the push to keep working from home jeopardizes firm culture and the ability of lawyers to learn. “Our profession cannot long endure a remote work model,” Morgan Stanley’s chief legal officer, Eric Grossman, wrote in a recent email to firms representing the bank, urging them to get their lawyers back into offices. In his email, Mr. Grossman said that remote work damaged firms’ ability to nurture talent and would yield less-successful outcomes for clients. ...

Among those surveyed, 83% said it was very important for their law firm to have work-from-home flexibility. Not quite half of respondents said they believed that associate development was hampered by a work-from-home model.

Many associates don’t want to jettison the office entirely, says Michael Ellenhorn, CEO of Decipher Investigative Intelligence, which advises law firms on hiring. “What they want is choice,” he says, noting that large U.S. firms in the first half of the year saw associates jump to other firms at a rate 52% higher than 2017—an indication that associates don’t want to be dictated to. ...

More than a year of remote work hasn’t dented profitability for large firms. According to a survey by Wells Fargo Private Bank’s legal specialty group, big law firms saw net income jump by an average of 10% in 2020, as demand for transactional work boomed and firms saved money on business travel.