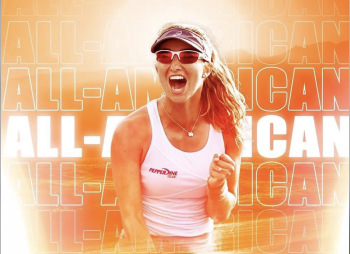 As she concludes her time at Pepperdine, Jessica Failla leaves as an All-American and as the #1 college tennis player on the UTR from January to March of 2021. She won the 2020 ITA National Summer Championships and was the All Tournaments Team #1 Player at National Indoors 2021. Most recently, she competed with Pepperdine’s women’s tennis team where she was the first player in program history to win their singles match in the NCAA Team Finals, scoring their first team point of the finals. The team ultimately finished as the runner-up in the NCAA finals (also best in program history).

She said the opportunity to get to the finals was “just an amazing culmination of six years of playing college tennis.”

Before any of this though, in 2017 Jessica transferred from USC to Pepperdine because she was looking for a university that offered a great tennis program, a rigorous education, and a strong spiritual life community. She found all three at Pepperdine.

“Pepperdine was the perfect fit for me and transferring there was definitely one of the best decisions that I ever made,” she said.

Jessica majored in International Studies-Politics at Seaver, and also holds degrees in the masters in Dispute Resolution and Legal Studies from the Caruso School of Law.

The athletics department has the tagline “competing with purpose,” and commits to “Christian values, to the academic well-being of all of our student-athletes and to competing for championships.” Indeed, they say that “[c]ompeting with Purpose provides the foundation on which champions are built.”

“The fact that Pepperdine has the combination of faith with your sport is my favorite part about Pepperdine,” said Jessica. “At the end of the day, as a Christian my goal is to glorify God in everything I do.” Growing up she learned from her parents and Fellowship of Christian Athletes to be a “competitor for Christ.”

For athletes like Jessica, the sports arena turns into a place where through the pursuit of excellence and how one plays the game become a part of worship.

“Being able to be a part of a community that is encouraging you to play your sport as an expression of your worship to God was something that I had learned from my parents when I was young, […] and to be able to do that at a level of tennis that was so high was amazing for me.”

Throughout her time at Pepperdine she credits that community with part of her success in athletics.

“Being in fellowship with other believers off the court was something that helped me so much on the court,” she said.

Student athletes were able to stay on campus during the 2020-2021 academic year at Pepperdine in order to practice and compete. Jessica was one of those students. ... She said what helped her get through that time were communities of faith that sprung up. Jennifer Gash and Sam and Sara Jackson each ran different Bible studies for the students on campus. Jessica noted that at the Jacksons’ Bible study, the couple took prayer requests and at 6:00 am would pray for an hour with all the students.

“It was so encouraging to me in my faith to have those kinds of people to look up to. The Bible studies helped me so much spiritually, but also helped me stay sane when we weren’t allowed to hang out and be with family or a lot of people. It was just nice to have that community.”

Jessica reflected on what it means to be a student athlete, dedicating over five hours a day to practice and fitness on top of balancing school work, spiritual life, and friendships. “It can be super overwhelming,” she said. “But that being said, it was definitely some of the most rewarding time spent of my life.” ...

I’m going to leave here knowing this was the best decision of my life to come to this school and I’ve grown so much as a person and so much as a tennis player. I just felt so incredibly blessed that I was healthy and surrounded by so many amazing Christian people.”

Leaving Pepperdine, she is pursuing a career in professional tennis. She is currently ranked 645th in the world, but hopes she can make the top 250 by the end of her first year of professional competition. She intends to be the best athlete she can, but also use competition as a platform to share God with others. “That’s something I was able to do at Pepperdine and I really want to continue that professionally.”