NY Times: The New Chief Chaplain At Harvard Is Atheist Author Of 'Good Without God' 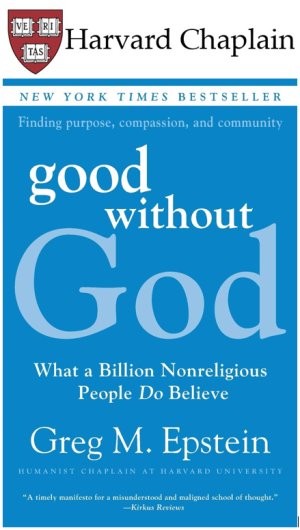 The Puritan colonists who settled in New England in the 1630s had a nagging concern about the churches they were building: How would they ensure that the clergymen would be literate? Their answer was Harvard University, a school that was established to educate the ministry and adopted the motto “Truth for Christ and the Church.” It was named after a pastor, John Harvard, and it would be more than 70 years before the school had a president who was not a clergyman.

Nearly four centuries later, Harvard’s organization of chaplains has elected as its next president an atheist named Greg Epstein, who takes on the job this week.

Mr. Epstein, 44, author of the book “Good Without God,” is a seemingly unusual choice for the role. He will coordinate the activities of more than 40 university chaplains, who lead the Christian, Jewish, Hindu, Buddhist and other religious communities on campus. Yet many Harvard students — some raised in families of faith, others never quite certain how to label their religious identities — attest to the influence that Mr. Epstein has had on their spiritual lives.

“There is a rising group of people who no longer identify with any religious tradition but still experience a real need for conversation and support around what it means to be a good human and live an ethical life,” said Mr. Epstein, who was raised in a Jewish household and has been Harvard’s humanist chaplain since 2005, teaching students about the progressive movement that centers people’s relationships with one another instead of with God.

To Mr. Epstein’s fellow campus chaplains, at least, the notion of being led by an atheist is not as counterintuitive as it might sound; his election was unanimous.

“Maybe in a more conservative university climate there might be a question like ‘What the heck are they doing at Harvard, having a humanist be the president of the chaplains?’” said Margit Hammerstrom, the Christian Science chaplain at Harvard. “But in this environment it works. Greg is known for wanting to keep lines of communication open between different faiths.”

The dozens of students whom Mr. Epstein mentors have found a source of meaning in the school’s organization of humanists, atheists and agnostics, reflecting a broader trend of young people across the United States who increasingly identify as spiritual but religiously nonaffiliated. That trend might be especially salient at Harvard; a Harvard Crimson survey of the class of 2019 found that those students were two times more likely to identify as atheist or agnostic than 18-year-olds in the general population. ...

To Mr. Epstein, becoming the organization’s head, especially as it gains more recognition from the university, comes as affirmation of a yearslong effort, started by his predecessor, to teach a campus with traditional religious roots about humanism.

Mr. Epstein’s community has tapped into the growing desire for meaning without faith in God. “Being able to find values and rituals but not having to believe in magic, that’s a powerful thing,” said A.J. Kumar, who served as the president of a Harvard humanist graduate student group that Mr. Epstein advised. ...

“Greg was the first choice of a committee that was made up of a Lutheran, a Christian Scientist, an evangelical Christian and a Bahá’í,” said the Rev. Kathleen Reed, a Lutheran chaplain who chaired the nominating committee. “We’re presenting to the university a vision of how the world could work when diverse traditions focus on how to be good humans and neighbors.”