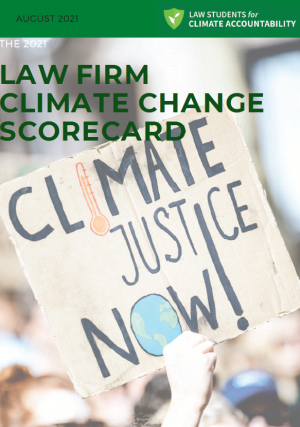 Last year, Law Students for Climate Accountability released a first-of-its-kind Climate Scorecard, which catalogued the climate-related work of the Vault 100 firms — the 100 top ranked firms in the US — and gave them grades for their performance. Released in October 2020, the report focused on transactional, litigation, and lobbying work over a five-year span that revealed staggering data: the large majority of firms were exacerbating climate change, facilitating $1.31 trillion in transactions and fighting in hundreds of cases to continue warming the planet and endangering low-income communities and communities of color. While 2020 saw the COVID-19 pandemic rage and the American West on fire, dying the skies orange and destroying entire communities, the report served to highlight Big Law’s role in climate injustice.

As driving declined and the economy stalled, many recognized this moment of crisis as a chance to move away from fossil fuels and move towards a just transition to a livable future.

The 2021 Climate Scorecard reveals that instead, top firms fought even harder to accelerate climate change. On the whole, data over a five-year window reveal a startling trend among Vault 100 firms:

But they are not alone. Only 3 firms received an A and 9 received a B, while 18 received a C, 34 received a D and 36 received an F. On the whole, 88 of the top 100 firms undertook work that worsened climate change. 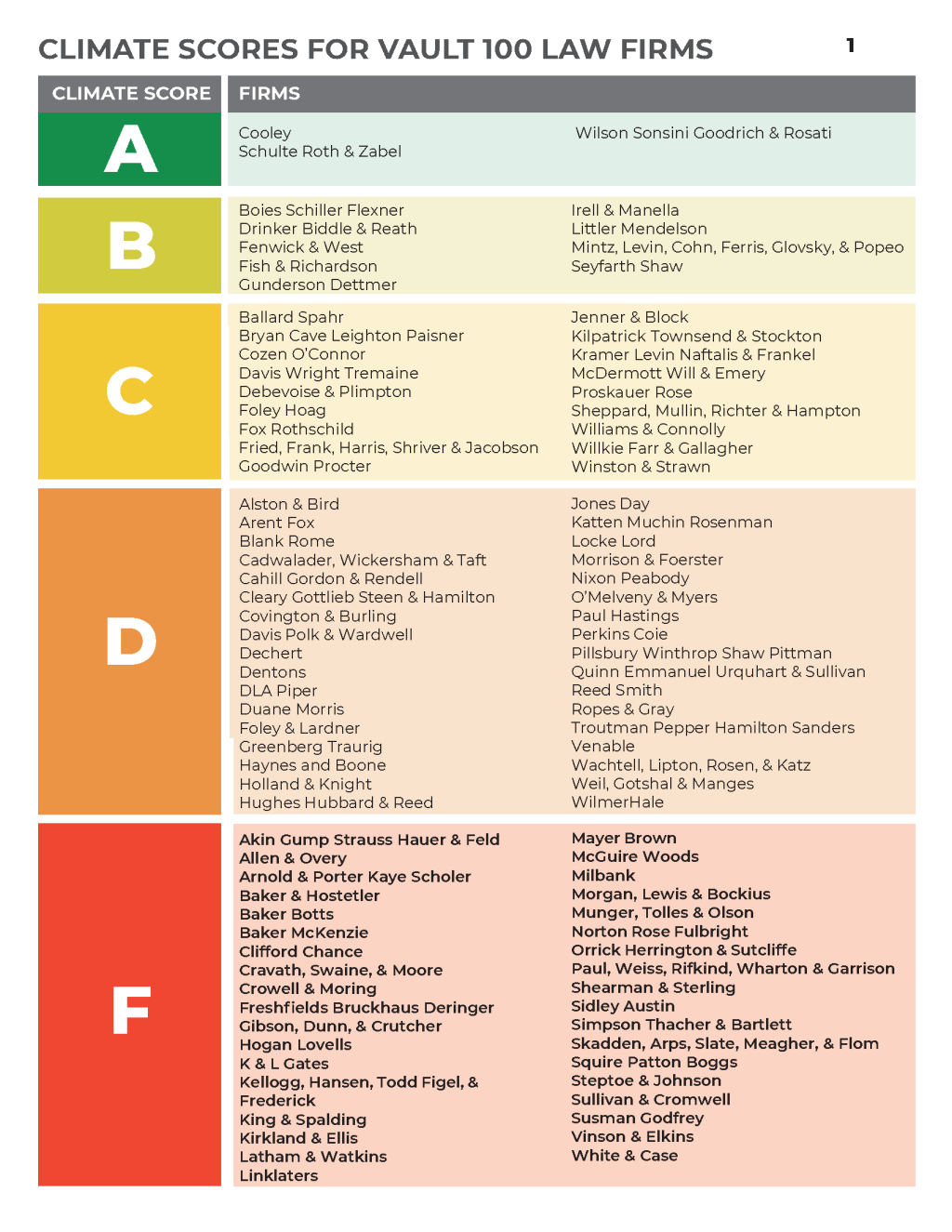 The report also documents two promising trends. Fossil fuel lobbying decreased, with firms receiving $34.9 million in compensation for fossil fuel lobbying in this report compared to $36.5 million in last year’s report. Firms also increased renewable energy transactions from $268 billion to $347 billion and renewable energy lobbying from $6.6 million to $8.3 million. But ultimately, while these figures are moving in the right direction, they remain woefully inadequate and are cold comfort to communities who bear the burden of both dangerous fossil fuel extraction and the worst consequences of climate change.

In early August, the United Nations International Panel on Climate Change (IPCC) released a major new scientific report summed up by a New York Times headline: “A Hotter Future Is Certain, Climate Panel Warns. But How Hot Is Up to Us.” Law firms must reckon with the fundamental role they play in this crisis. From litigation to transactional work to lobbying, the fossil fuel interests that have created this emergency are aided by armies of the best trained lawyers in the world. These firms understand their work has ethical implications, taking every opportunity to laud their pro bono hours. It is past time that each firm adopts an ethical standard for its climate work and makes clear which side of history it wishes to be on.

This report is intended not only to document the legal industry’s complicity in the climate crisis, but to support those inside and outside the industry trying to realize a better future.

First, this report provides law students and young lawyers with a resource when deciding on their current and future employment. Today’s law students are preparing for careers that will be profoundly shaped by the climate crisis, no matter where they work. This scorecard provides a resource to begin understanding and questioning the role that the legal industry plays in that crisis. It’s up to this generation of lawyers to transform the legal industry into one that protects, rather than harms, the planet and communities.

Second, we hope this report will spur change in the Vault 100 firms themselves. Vault 100 firms undoubtedly provide excellent representation. These firms could use their extraordinary skills to accelerate the transition to a sustainable future, but too many are instead lending their services to the companies driving the climate crisis. Law firms are increasingly recognizing their obligations to fight climate change, and they frequently emphasize their pro bono work, internal sustainability measures, and ESG practices. Although these initiatives are welcome, law firms’ work for fossil fuel clients exists on a far greater scale. Law firms cannot maintain reputations as socially responsible actors as long as they continue to support the destructive fossil fuel industry. Firms can take the Law Firm Climate Responsibility Pledge included in this report to agree to stop taking on new fossil fuel industry work, continue to take on renewable energy industry work and litigation to fight climate change, and to completely phase out fossil fuel work by 2025.

Third, this report calls upon clients of Vault 100 law firms, some of whom have their own commitments to mitigate climate change, to ensure their legal representation is as committed to fighting the global climate crisis as they are. We encourage law firm clients to review this report and insist the law firms they hire phase out support for the fossil fuel industry.

The movement to change the legal industry is only growing.

Law students are occupying offices, disrupting recruiting events, speaking to their classmates, and standing in solidarity with the communities that have led the fight for climate action and a just transition. Many within law firms are doing their best to move their firms away from extraction. Law firms have an ethical obligation to heed these calls to change.

If they refuse, we will only grow louder.