Illinois Property Tax Board Votes 5-0 To Give Trump $1 Million Refund Due To Overvaluation Of Chicago Skyscraper; Democratic Attorney General Sues To Block It 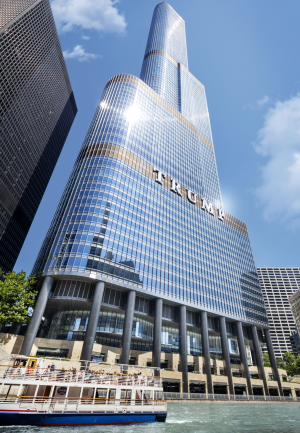 The Illinois Property Tax Appeal Board has decided former President Donald Trump is due a $1 million refund on his skyscraper’s 2011 tax bill, ruling last month that the Cook County Board of Review overestimated the value of the building’s hotel rooms and retail space.

But the Cook County State’s Attorney has filed suit with the Illinois Appellate Court, seeking to block the tax refund, which has yet to be issued. ... It’s the latest twist in the case originally filed by Ald. Edward M. Burke, whose law firm argued Cook County officials had over-assessed Trump’s skyscraper. Burke’s former law firm Klafter & Burke had won more than $14 million in tax breaks for Trump over a dozen years, but the alderman ended the relationship in 2018, citing “irreconcilable differences” between the Chicago Democrat who represents a predominantly Hispanic 14th Ward, where residents objected to many of the Republican president’s policies.

Burke has since been indicted by a federal grand jury on charges that he blocked businesses from getting city permits unless they hired his law firm. He has left the firm, but remains on the City Council while awaiting trial. ...

[T]he state agency’s board voted 5-0 on June 2 to reduce the assessments on the building’s commercial property, which would trigger a refund of $1.03 million for Trump. ...