Cornell Professor Donates A Kidney To His Colleague

Last year, I blogged the wonderful story of UCLA Dean Jennifer Mnookin, who donated one of her kidneys to her father, Bob Mnookin, Samuel Williston Professor of Law at Harvard. Over the summer, Cornell professor Adam Litwin donated one of his kidneys to his colleague, Ron Ehrenberg: 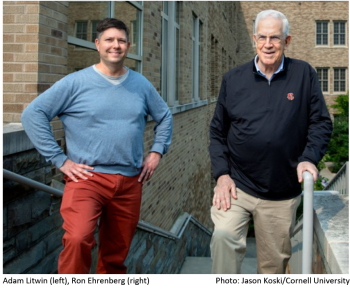 Wonderful news, yes – but that’s only half the story.

The kidney came not from a stranger but from his friend and colleague at the ILR School, associate professor Adam Seth Litwin, who spent more than two years secretly improving his health so he could make the donation that changed Ehrenberg’s life.

“In my mind,” Litwin said, “Ron personifies the best of the ILR School and of the university. I would give my heart to this enterprise if I could, so this is about as close I could get.”

For several years, Ehrenberg – the Irving M. Ives Professor of Industrial and Labor Relations and Economics, and a member of the Cornell faculty since 1975 – was living with end-stage renal disease and on a waiting list for a kidney.  ...

Two years earlier, Litwin found out that he was a match and could conceivably donate a kidney to his colleague, mentor and friend. But he wanted to improve his overall health before committing to the donation, so he kept his plan a secret.

“Ron knew nothing about this, absolutely nothing,” Litwin said. “I didn’t want to disappoint him if it didn’t work out. And, I needed to make sure that even if I were medically cleared, my family was onboard, too. ”

Claire Litwin, Adam’s wife, admitted to being “surprised, proud and a little scared” by her husband’s decision.

“I never really imagined Adam would be interested in donating, but I think it’s such a valuable thing – obviously for the people who receive an organ donation, but also for society as a whole,” she said. “His act of altruism and generosity reminds us of the good people can do for each other – something we might forget in these divided times.”