Starting with the 2023-2024 school year, law schools’ Standard 509 Information Reports will include information about the number of students who receive student loans, and the data will be categorized by race, ethnicity and gender.

The council of the ABA’s Section of Legal Education and Admissions to the Bar approved the change Friday, when it met virtually. Data collection for loan information will start with the 2022-2023 school year, according to a memo from the questionnaire and template committee.

The council also approved a committee recommendation that the reports include data about students who receive scholarships and grants that is categorized by race, ethnicity and gender. Committee members found the information would help the council determine law school compliance with Standard 206, which addresses diversity and inclusion.

On Friday, the Council for the ABA Section of Legal Education and Admissions to the Bar voted to track the total number of students receiving a tuition discount at each ABA-accredited law school by race and gender. This decision builds upon the council’s decision earlier this summer to track borrowing rates by race and gender.

In practice, this will allow consumers, the public, and researchers to identify law schools where long-marginalized groups borrow or pay full price in greater numbers. ...

However, these new data requirements only go partly toward addressing the underlying problem. At this time, the ABA has only committed to tracking whether students borrow or receive a tuition discount — not how much they borrow or pay by race, gender, or otherwise.

Without further refinement, a $500 discount on $50,000 annual tuition would count the same as a full scholarship. That white students borrow $28,000 less than Black students (according to an ABA Young Lawyers Division survey) would be completely lost in the mix. These basic disclosures might have some positive impact — but it’s unlikely to reveal much, provide sufficient support for enforcement of the diversity standard, or spur major change.

Under our proposal, schools would publish the distribution of tuition discounts and student borrowing by race, gender, and overall. In legal education, the most famous application of a frequency distribution is NALP’s bimodal salary distribution curve: 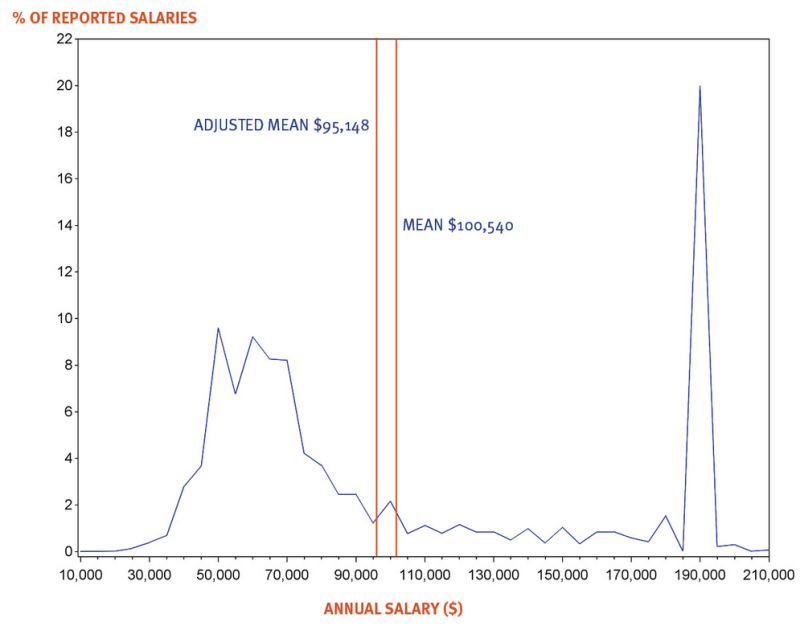 This curve continues to shape how policymakers, researchers, consumers, and the public understand entry-level salaries. In 2019, the mean salary for reporting graduates was $100,540. However, very few graduates made at or near that amount. Instead graduates starkly fell into one of two categories — around $190,000 on the one side and between $50,000 and $70,000 on the other. This method of data presentation is impactful because readers must confront the reality of individuals that make up the averages, not just the averages themselves.

As applied to tuition prices and debt, a frequency distribution would remind stakeholders that individual students fall into a wide range. This can expose blind spots and signal opportunities for change. We believe the resultant data would allow legal educators and policymakers to confront difficult realities and to direct resources in a manner that strengthens and stabilizes the law school pipeline, rather than undermines it.

The ABA is on the right track, but the next step remains necessary and urgent.

Nothing better exemplifies the Gramscian “long march through the institutions” than the role of the American Bar Association in transforming America’s legal establishment. ...

The ABA has recently proposed changes to its accreditation standards that make the organization’s social engineering even more intrusive. Outside of a few law professor blogs, however, the issue barely registered in the public commentariat. It warrants far greater attention. The ABA’s proposed changes dramatically extend the “diversity and inclusion” requirement of Standard 206 for both students and faculty. ...

Faculty critics have charged that the ABA’s proposed changes are “ill-supported by evidence.” Moreover, many of the revised terms are imprecise and susceptible of subjective application, and the ABA’s prolix “interpretations,” which impose on schools quota-oriented data collection obligations, vague affirmative action duties (applicable to both students and faculty), and the requirement of “diversity, equity, and inclusion training,” demand ideological conformity and possibly violate the faculty’s academic freedom.

The ABA’s interpretation of Proposed Standard 206 repeats several times the Orwellian mantra “The determination of a law school’s satisfaction of such obligations is based on the totality of the law school’s actions and results achieved.” Determining compliance (or non-compliance), in other words, is within the sole and unfettered discretion of the ABA—an invitation for capricious decision-making. Faculty critics have condemned the ABA’s proposed changes as “bizarre,” “dubious,” “an abuse of power,” and calculated to mandate unlawful conduct by law schools, provoking litigation.

This is just the tip of the iceberg. The ABA also seeks to require (in Proposed Standard 303(c)) law school curricula to include “training and education to law students on bias, cross-cultural competency, and racism: (1) at the start of the program of legal education, and (2) at least once again before graduation.” Here also, the ABA’s interpretation does not define “cross-cultural competency,” preferring to leave the determination of compliance entirely up to the overseers at the ABA: “[L]aw schools must demonstrate that all law students are required to participate in a substantial activity designed to reinforce the skill of cultural competency and their obligation as future lawyers to work to eliminate racism in the legal profession.” (Emphasis added.) Faculty critics charge that this constitutes an “unwarranted intrusion” into course content and an “overreach.”

Indeed, it is—and has been for some time. The ABA’s proposed changes do not stop there, but surely the reader gets the drift. Like other leftist initiatives currently underway, the ABA’s proposed revisions are simultaneously grandiose, extreme, and hubristic. Will the ABA’s long march continue, or will—at long last—the beleaguered defenders manning the ramparts of the legal academy repel further intrusion? Stay tuned.