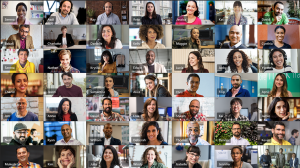 This March, my partners and I paid special bonuses to all employees at my law firm in the heart of this city. Unlike at many other firms around the country, this $395,000 in bonuses — in addition to the $2.7 million in year-end bonuses — was not some apology or atonement for cutbacks stemming from the coronavirus economy. We wanted to reward all 90 of our employees for their record-breaking work in 2020: Our small, specialized, 28-year-old firm had its best year yet, and we did it mostly together.

Not Zoom together — real together.

In March 2020, a tidal wave of stay-at-home orders from local and state officials turned downtown Houston into the kind of a ghost town one might imagine when a hurricane is about to hit. We closed our office along with most other city businesses.

Advocates of the move hoped that working from home would not slow productivity significantly and could obviate the need for office space in the future. But in a remote-work setting, we never matched the team creativity and production we had taken for granted at our office. On Zoom, some people were distracted and anxious to leave meetings, but in person, they were engaged and animated — there was just no comparison.

While lawyers at other Houston law firms claimed to be happy with remote work, I believe it prevented us from performing at our sharpest. There is a cost to working at home that goes beyond depression, disconnectedness and failing to bathe regularly: It can drain morale and diminish collegiality.

So after about five weeks, we reopened our office. Some of our lawyers had, in fact, already been coming in. Many of our clients — a group that includes a collection of Fortune 500 companies in energy, health care and tech — jealously applauded our decision in private conversations with us. But they feared being second-guessed by stockholders and worried about problems that could arise from reopening offices. Other law firms, big and small, kept their offices shut and instituted pay cuts, furloughs and layoffs. Some remain closed. ...

I think the decision to reopen paid off. In 2020 our revenue grew by 39 percent, but not because we cut costs like so many businesses around the country that posted strong years. In 2020, we never cut staff members or salaries. We instituted no furloughs or layoffs. Instead, we hired eight new lawyers and picked up 75 clients in 2020. ...

As the year wore on, it became clear to me that ambitious lawyers at firms like ours simply couldn’t thrive in a virtual setting. ... Once vaccines became available, we issued a vaccine mandate. Our lawyers were on board. Other lawyers — especially those at competing firms — said they were envious.