Following up on yesterday's post, Tony Varona Takes The High Road In His Farewell Message After Being Fired Less Than 2 Years Into His Deanship:  Miami Herald, Frenk Appoints Acting UM Law Dean, As Faculty Demands Investigation Into Varona’s Firing: 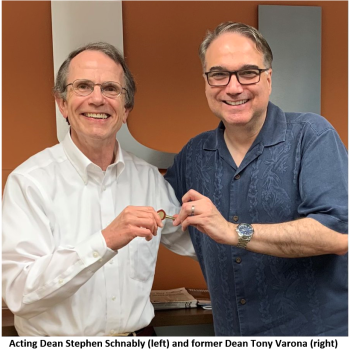 More than a month after abruptly firing Anthony Varona as dean of the law school, sparking outrage in the Miami and national legal communities, University of Miami President Julio Frenk on Wednesday appointed law professor Stephen J. Schnably as acting dean effective Thursday, while the search for an interim dean continues and the calls for a thorough investigation into Varona’s termination persist. ...

Schnably will remain as acting dean until the start of the fall semester in August, said Jackie Menendez, UM’s vice president of communication. By then, the law school plans to have an interim dean in place, likely for a term of one to two years. ...

Stephen Urice, a law professor at UM since 2006, said he and his colleagues support Schnably’s temporary promotion, but haven’t forgotten about Varona’s ousting. “Professor Schnably is highly respected, and I expect the faculty will fully support him,” he said. “I expect the faculty also will continue to demand a forthright and complete explanation for President Frenk’s termination of Dean Varona’s decanal appointment.” ...

The Wednesday announcement followed a series of meetings, some contentious, that Frenk, Provost Jeffrey Duerk, and key members of the UM Board of Trustees, including newly installed board chairwoman Laurie Silvers, held with faculty and alumni over the past few weeks.

Some of those conversations partly led to Schnably’s appointment, sources told the Herald.

Sources also said the faculty delegation of tenured professors repeatedly asked the administration to tap a respected academic in the legal community to be the next interim dean. They vetoed, among other potential candidates, Duerk, who’s an accomplished engineer and scientist but not a law school academic, and members of the Board of Trustees, who the faculty contends do not meet the requirements set forth by the Association for American Law Schools. As part of the AALS bylaws, “The faculty shall have meaningful involvement in the selection of the dean or interim dean.”

Last week, UM law professor Mary Anne Franks resigned from the faculty delegation. “I agreed to serve on the delegation in order to push for Dean Varona’s reinstatement and to obtain assurances that the administration respects the values fundamental to an institution of higher learning: courage, integrity, and accountability. When those assurances were not forthcoming, I decided to resign from the delegation,” Franks wrote in an email Wednesday to the Herald. ...

Donna Kay Coker, who has been professor at the UM law school for more than 25 years, said Schnably “is an excellent choice for an acting dean.” “I have nothing but great things to say about that choice,” she said.

But, she noted, the faculty still hasn’t received a “satisfactory explanation” for Varona’s removal. “We still don’t have answers to fundamental questions that we’ve raised with the administration,” she said, “and those questions are how did this decision come about, were members of the Board of Trustees involved, did the president receive pressure from a member or multiple members of the Board of Trustees to make this decision, and why did the president link the decision in his letter to the capital campaign when Dean Varona had done a quite remarkable job of fundraising during a time of a pandemic.”