ProPublica: The Billionaire Playbook — How Sports Owners Use Their Teams To Avoid Millions In Taxes

ProPublica, The Billionaire Playbook: How Sports Owners Use Their Teams to Avoid Millions in Taxes:

Owners like Steve Ballmer can take the kinds of deductions on team assets — everything from media deals to player contracts — that industrialists take on factory equipment. That helps them pay lower tax rates than players and even stadium workers.

At a concession stand at Staples Center in Los Angeles, Adelaide Avila was pingponging between pouring beers, wiping down counters and taking out the trash. ... When she filed taxes for her previous year’s labors at the arena and her second job driving for Uber, the 50-year-old Avila reported making $44,810. The federal government took a 14.1% cut. ...

On the court that night, the players were also hard at work. None more so than LeBron James. ... In his tax return, James reported making $124 million in 2018. He paid a federal income tax rate of 35.9%. Not surprisingly, it was more than double the rate paid by Avila.

The wealthiest person in the building that night, in all likelihood, was Steve Ballmer, owner of the Clippers. ... For the prior year, Ballmer reported making $656 million. The dollar figure he paid in taxes was large, $78 million; but as a percentage of what he made, it was tiny. Records reviewed by ProPublica show his federal income tax rate was just 12%.

Ballmer pays such a low rate, in part, because of a provision of the U.S. tax code. When someone buys a business, they’re often able to deduct almost the entire sale price against their income during the ensuing years. That allows them to pay less in taxes. The underlying logic is that the purchase price was composed of assets — buildings, equipment, patents and more — that degrade over time and should be counted as expenses.

But in few industries is that tax treatment more detached from economic reality than in professional sports. Teams’ most valuable assets, such as TV deals and player contracts, are virtually guaranteed to regenerate because sports franchises are essentially monopolies. There’s little risk that players will stop playing for Ballmer’s Clippers or that TV stations will stop airing their games. But Ballmer still gets to deduct the value of those assets over time, almost $2 billion in all, from his taxable income. ...

Glimpses of the Clippers’ real-world financial results show the business has often been profitable. Those include audited financials disclosed in a Bank of America report just before Ballmer bought the team, as well as NBA records that were leaked after he became owner.

But IRS records obtained by ProPublica show the Clippers have reported $700 million in losses for tax purposes in recent years. Not only does Ballmer not have to pay tax on any real-world Clippers profits, he can use the tax write-off to offset his other income. ...

Ballmer isn’t alone. ProPublica reviewed tax information for dozens of team owners across the four largest American pro sports leagues. Owners frequently report incomes for their teams that are millions below their real-world earnings, according to the tax records, previously leaked team financial records and interviews with experts. ... 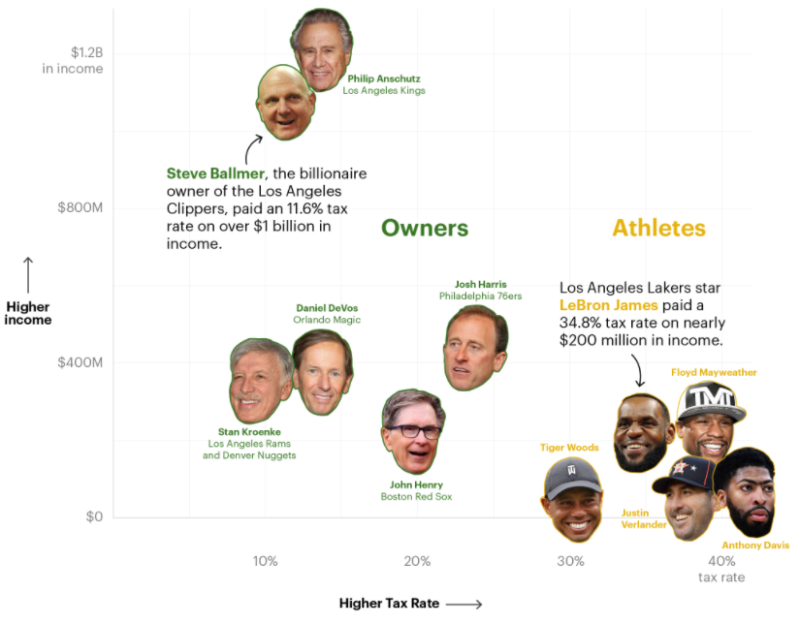 ProPublica, Eight Takeaways From ProPublica’s Investigation of How Sports Owners Use Their Teams to Avoid Taxes:

How do billionaire team owners end up paying lower tax rates not only than their millionaire players, but even the person serving beer in the stadium? Let’s go to the highlights.